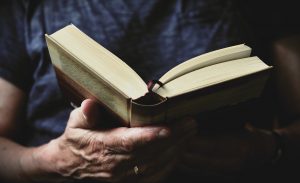 By Nowell+ Copley, Rector of All Saints Church, Spartanburg

I love a good story—a tale that draws me in from the very beginning, drops me into the lives of the characters and delivers me to surprising and unexpected ends. A story that inextricably links me to its plot and carries me along as if I were being written into the story as well. I love a good story, but I need a great story. A good story will invite you in; a great story sweeps you away with it and requires of you an engagement with the narrative that strains and forces a reordering of assumptions and priorities. A great story will change you in deep ways, or at the very least, demand from you paradigm shifts along fault lines you never knew existed. A great story, and the retelling of it, shapes and reshapes us in the hearing and the telling, consistently moving us to affirm its power over us. A great story clarifies beyond the shadows of human understanding and ignorance and extends an invitation to deeper and weightier things, an opportunity to peer behind the veil into the extraordinary.

My conversion to Anglicanism coincided with my conversion to Christianity. I was born again at the age of 33 while attending an Episcopal church at the invitation of a friend. I had attended church growing up, compelled to do so and generally disinterested apart from the social opportunities. My first kiss was, of course, on a hayride at that church. That was life-changing to be sure, but not in a spiritual sense. When the scales fell from my eyes I was looking into an Anglican sunrise. I was born into a deliberate liturgical rhythm that told and retold the gospel story. The seasons of the liturgical year became the framework and provided context for my conversion. I came to love Jesus as the main character of this great story I had been swept into, and His story, told and retold, took root in my heart. That story, the greatest story ever told, would become the only story that really mattered to me. Every other story (including my own) only mattered in so far as it related to his story.

In the telling and retelling of his story, we come to realize that everyone’s own story validates and serves the greater. As an Anglican priest, I preside over the telling of his story. I do that throughout the year with the lectionary, and I do it every time we gather at the table to share his body and blood. The seasons of the year provide context for that story to be told. I don’t have to be unique or radical or relevant. I need to be faithful to the story, his story.

At All Saints Church Spartanburg, we’ll celebrate Advent not so much as a precursor to Christmas, lost in the shuffle of the holidays, but as an invitation to the retelling of the greatest story ever told. It’s a prologue that sets the stage to begin again, to retell a story that’s new every morning. If our Advent reflections take us only to Christmas, then we have failed and not been faithful. Advent allows us an opportunity reset the stage, to celebrate the coming of the Christ child of course, but to look beyond that to a distant shore, a place where all things have been made new, a place only his story can take us. Amen. Come, Lord Jesus!

Nowell+ Copley serves as Rector of All Saints Church in Spartanburg, South Carolina. He’s married to Laurie and has three children and seven grandchildren. He loves to golf and work in his yard if he’s not riding his bike on some trail in the wilds about town.

The Light Has Come

On Fasting in Lent