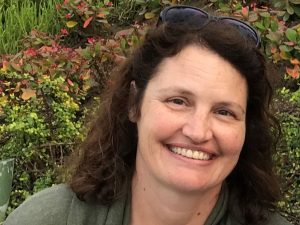 In the midst of an exceedingly challenging season, AMiA chaplain Cindy Miller has been given an opportunity. As many ministries have been placed on pause in response to the pandemic, Cindy has seen doors open in ways that wouldn’t have been possible just months before. “God has just been transcending,” she says. “He’s just bigger than our own limitations.”

God’s transcendent work during COVID-19 began long before the virus hit, and it included uniquely preparing Cindy to serve in her current role. Through her numerous years of work as a registered nurse, Cindy was familiar with the health care system. But she’d also had a lot of experience as a patient. Shortly after her children were born, Cindy became very ill, suffering from both lupus and a neurological disorder. No one expected her to get better. However, 7 ½ years ago, the Lord intervened. “God totally and miraculously healed me,” Cindy recalls, explaining how, after a prayer time, she went from being locked at home in a wheelchair to suddenly being able to move. For the past seven years, she’s had no sign of the illnesses.

Following this healing, Cindy began to ask the Lord what he wanted her to do and questioned if she should return to nursing. However, she says, “God prompted me to follow this long-time call to be ordained … but I didn’t understand why yet.”

In 2014 she was ordained as a deacon in the Anglican Mission and several years after that started chaplaincy training. As Cindy began serving as a volunteer chaplain, she discovered how this role was the “sweet spot” between her professional experience as a nurse, her personal experience with illness and her heart for sharing God’s love.

A year and a half ago, Cindy became board-certified as a chaplain, and in November 2019, she began working at Good Samaritan Hospital in the San Francisco Bay Area, where she’d previously volunteered. As the only chaplain on staff, she was tasked with rebuilding the chaplaincy program and overseeing the volunteer program.

During her first three months on the job, at a hospital that wasn’t accustomed to having a chaplain on staff, Cindy often found that while she was accepted, many people didn’t understand what a chaplain does. “They didn’t know what to do with me,” she recalls. But she began introducing herself.

Then COVID-19 hit, and the hospital closed its doors to all visitors and volunteers, including most community clergy. Suddenly Cindy was the sole spiritual presence ministering to COVID and non-COVID patients alike, as well as to the hospital personnel. “We had a staff full of highly anxious people,” she says, and these staff members quickly got to know her—the only one not clothed in scrubs.

With the onset of the coronavirus, Cindy felt prompted to wear her clerical collar to work—something she hadn’t typically done on a daily basis as she found that it sometimes closed doors to talking with people who don’t believe in God. But she donned her collar nearly every day for the first three months of the pandemic. “Suddenly it was a sign of hope for people,” she explains. Staff leaders at the hospital told her how her presence—whether people had time to stop and talk to her or not—brought anxiety levels down. And, as the staff have been faced with the reality of their own mortality, Cindy has been able to have conversations that she believes would not have taken place otherwise.

Just as COVID-19 has given many people a greater openness to receiving spiritual support, it has led to increased opportunities to minister to Christians from other denominations who would not have welcomed an Anglican chaplain just months before. “I found a lot of walls coming down that I think would have taken a lot longer to come down [if it weren’t for COVID]. … “People were able to receive care and support from me who previously wouldn’t have.”

Cindy recalls meeting with a Catholic man convinced he was doing to die even though the nurses caring for him believed he was stable. “He had a burden and needed to confess something. He wasn’t going to feel comfortable until he dealt with that.” Though he knew Cindy wasn’t Catholic, he was able to pray and confess. Three days later, he told her, “Cindy, you made all the difference for me because you were there when I needed it.”

“God is doing wonderful things in circumstances like that, that I suspect I would not have experienced if things had not been locked down,” Cindy shares. Since this instance, her ability to minister has continued to grow as those in the hospital have discovered that she’s able to offer deep spiritual and emotional support. “People are responding to that.”

Admittedly, the workload has been heavy. Cindy shares about a recent week when she spent time at the bedsides of eight patients who were dying. “To see what [God] was doing in the families’ lives is what made it possible to stay.”

As she serves within the opportunity of the present pandemic, Cindy suggests several ways that people can pray for her and other chaplains like her. First, she asks for prayer for “continuing strength and wisdom in taking care of ourselves.” She shares that hospital staff are dealing with compassion fatigue, and chaplains need to pursue good self-care as they assist others.

Second, she asks for prayer that she would continue to sense God’s leading. “I’ve been so astounded by getting a prompt from him,” she says, explaining how the Lord will bring a name to her mind and when she goes in to talk to that person, she finds they need her at just that moment. “Pray I will stay close to God so I can hear his voice.”

Finally, she asks that she and other chaplains will see things as God sees them so that his compassion will flow through them. “We can get very overwhelmed if we don’t see it through his eyes.”

When the pandemic is viewed through God’s eyes, it’s apparent that Cindy is serving at Good Samaritan “for such a time as this.” As she says, “It’s so clear to me that I’m here specifically for this season.”

Sitting with Job: An Interview with Chaplain Chris Little