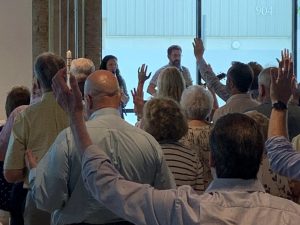 Led in the Spirit: Purposeful Music for Ministry and Worship

What does a typical week of planning music for worship look like?

Ryan Flanigan has been choosing songs for Christian worship nearly every week for the past 20 years. Come to Living Classroom and hear how Ryan approaches song selection and styles with an eye to how the music jives with the lections, the Anglican Calendar and seasons, as well as with the three streams: Scripture, Sacrament and Spirit. Gain insight into the collaborative development between message, sermon and song, and learn how much prayer and preparation goes into a typical week’s music. Ryan will also share some musical examples, including original songs from the AMiA’s very own Liturgical Folk music project.

Ryan Flanigan was born and raised in Chicagoland and has been leading church music since 1997. He grew up in a musical family and a church that valued music greatly. Ryan moved to Dallas in 2000 to attend Christ for the Nations Institute. He graduated from CFNI in 2002 and went on to earn a bachelor’s degree at Dallas Baptist University in 2004. He moved back to Chicagoland to attend Trinity Evangelical Divinity School (TEDS) from 2004 to 2007. He earned a master’s degree at TEDS and spent the next seven years in full-time worship arts ministry at River Valley Church in Mishawaka, Indiana. In addition to leading church music, Ryan loves reading good fiction, exploring Dallas foodie culture and building relationships with local artists. One of his greatest passions is writing, performing and recording his songs. Ryan is married to Melissa, and they have three kids.