Alpha: A Tool for Transformation 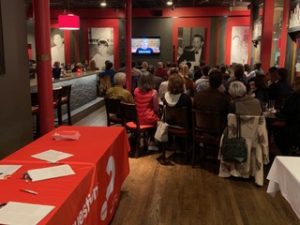 By David+ Larlee, Vicar of All Saints Dallas

From the inner city of Detroit to the Colorado Rockies, to trailer parks in North Texas to the frozen plains of the Midwest, 1,100 church leaders recently gathered together at the 2019 Alpha Conference to seek the Lord and his Kingdom. These leaders were as diverse as possible in terms of their ethnic, economic and denominational backgrounds. We met to worship, learn from one another and pray for each other. Catholics, Anglicans, Presbyterians, Baptists, Methodists, Pentecostals and many others—we were all together praying for the renewal and transformation of our society.

That the church in North America is facing unprecedented challenges, we all agreed upon. That our culture has and is moving away from its faith-based moorings, we all agreed upon. That our country is becoming increasingly polarized and the systems and structures Christians were once able to rely upon seem to be less effective, we all agreed upon. Yet amid those realities, a resounding chorus of hope emerged over the course of the conference. It could be heard over coffee, in the discussion groups, in the worship and in the plenary sessions. Every single challenge we face is also an incredible opportunity—if you see the challenges as Jesus does.

However, to seize these opportunities, we need to explore honest questions about ourselves and the churches we lead. So we considered the following:

What are the facts about evangelism in America today? How do the new trends in evangelism reveal the challenges of our culture and offer hope-filled approaches to reach those who don’t know Jesus?

The Barna Group and Alpha released a joint study on trends in evangelism and what they discovered was absolutely fascinating. In their report was incredible data that looked at questions like, “What do non-Christians want from faith-based conversations?”

Never before have people in our culture been so poised to come to Alpha and make the most of the experience of authentic community.

How can our churches and cities be renewed through prayer?

Hearing from Jon Tyson (pastor of Church of the City, New York) and Danielle Strickland (church leader and justice advocate), we were stirred to pray with urgency and to seek the Lord that he might fill us with his presence. Nothing new here, right? What was new to me was testimony after testimony of how people who have been through Alpha—ordinary people filled with the spirit of God—who have then gone into prisons, ministered to refugees, helped prostitutes, tackled the modern-day slave trade, sharing the love of Jesus and seeing lives changed all over the country.

To be frank, this was such a bold vision of a church mobilized that I found myself weeping with tears of hope and saying, “That’s the church my city needs.” God is using Alpha today as a place of encounter so that our communities become places where the most natural thing in the world is for people to leave Sunday worship and go out as change agents in society for the Kingdom of Jesus.

How do we reclaim the culture of hospitality and listening?

Where can I go for a safe conversation?  This is one of the things our culture is asking for. Is that surprising considering the current political climate and the division in America across so many lines? And yet the churches that are hosting Alpha and creating a safe space for non-threatening, open dialogue find that the byproduct is an incredible increase in diversity of the people who make up their congregation.

I have been involved with Alpha since 2001. I am currently helping with my 45th Alpha course. I’ve helped with Alpha courses in churches, in prisons and with the homeless, and even helped run an Alpha course in a West End theater in London. It is my heartfelt conviction that the Alpha course is a tool Jesus is using to transform culture and society. Hospitality and listening have become a primary way in which Jesus is making himself known to those who don’t know him. My encouragement to you is to attend an Alpha course and then reserve January 30-31, 2020 to come and join me and others in Phoenix, Arizona for the Alpha Conference 2020. You’ll be encouraged, inspired and empowered.

David Larlee is a Canadian who came to Dallas via London, UK. In 2004 he was ordained as an Anglican priest and served an inner-city congregation in London for 10 years. David and Rachel have three young sons. His interests include ice hockey (especially the Dallas Stars), reading and live music. He obtained a Bachelor of Arts from Mount Allison University in 2000, a Master of Arts from the University of Western Ontario in 2001 and a Bachelor of Theology from the University of Oxford in 2004.