I felt the call to plant a church in the summer of 2011. Honestly, I didn’t want to plant a church. In 2007 I helped start a church, and was comfortable being the number-two guy. I was keenly aware of the high cost and toil of church planting. Like an NCAA freshman at Kentucky or Duke, I was “one and done”—or so I thought. The church where I worked was rapidly growing. I had gained a lot of leadership and influence, without any of the pressure, stress or expectations that come from being the lead guy. Heaven! Starting another church and leading it wasn’t in my career plan.

After months of wrestling with the call, I finally gave in. I began praying and asking where God wanted me to go. It was October 12, 2011—exactly seven years ago today (I’m writing this on October 12, 2018)—that God lead me to a sketchy park in downtown San Antonio, Texas.

I sat on a bench in the middle of San Pedro Park and watched homeless people, college students, young families, skaters and tennis players do their thing all in the same place. The diversity astounded me. It was a far cry from the suburban bubble that I had become accustomed to. I felt the Father say, “I’m doing something here. Come join Me. Seek first the Kingdom. Make disciples. Join with others. And you will see a church planted as a byproduct.”

Excitement set in as I had visions of baptizing hundreds of witches and drug dealers—you know, the type of people who are obviously far from God. I was suddenly energized to go and make disciples of all nations. After six months, I transitioned out of our church and they sent me and a few friends downtown to reach all the heathens for Christ.

Seven years later, no witches, no drug dealers. Only a handful of baptisms and one hundred and thirty people in our congregation.

Most of the people who call Gathering Midtown their church are tired, disillusioned and dejected because of the Church. They have massive ministry wounds, have suffered from leadership abuse and/or have escaped cults. Some have a faith that is barely intact. Some aren’t yet disciples of Christ and are kicking the tires one last time. Most have sat in a pew and done more than wonder if there was more to the Story. They left Church life to go see. All are tired of Christianity without Christ.

Almost weekly I hear some version of the same story: “I’m so glad I found this faith family! I love Jesus but I struggle with His church. I’ve finally found a safe place to worship and meet with Him. This place is honest, authentic and peaceful. I feel His presence. There is a gentleness here.”

There are scores of ecclesiastical exiles who are looking for more than an exhilarating experience when they gather with Jesus’ people on the weekend. They want truth. They want His presence. They long for communion. In Anglican language, they’re looking for a comprehensive place where the three streams of Scripture, Spirit and Sacrament converge. A people and a place that’s “three for three” seems rare and hard to find.

While I expected to be baptizing witches left and right, the Lord has sent—and continues to send—sheep who have been beaten, neglected, attacked and rejected.

Early on, my immaturity caused me to discount and discredit all the existing Christians who were coming to the church I planted for witches and drug dealers. Who plants a church and wants people from someone else’s church?

I’ve now learned to welcome and celebrate the people whom God has chosen to send my way. I deeply love them. It’s a profound privilege and joy to pastor them into health and maturity.

Third, the Benefit of AMiA

I grew up, was trained in and was licensed in the Assemblies of God. Our church was originally planted under that denomination. I’m deeply grateful for them. While I have always embraced the Spirit, I’ve consistently hungered for more of the Scripture and, being completely transparent, didn’t know what I was missing with the Sacrament.

All I knew was that communion was supposed to be celebrated once a quarter on a Sunday night with one of those bland wafers and Welch’s. Lots of Welch’s. Actually, just a shot glass of Welch’s per person—not too much. Shot glass, yes. Alcohol, no.

Many people assume that liturgy is what drew me to become an Anglican priest. No. What drew me to the Anglican Way is the weight and depth behind everything we believe. It’s not shallow. It’s not based on feelings. There’s a sweet reasonableness to it. A middle way. A fullness to our life in Christ. The conviction to be informed by ancient ways while translating them into the future context is one of my favorite aspects.

Since becoming Anglican—or really, since discovering I’ve had Anglican leanings all along—my life has become more comprehensive and stable. I have more love, patience and gentleness and am seeing more of the Spirit’s fruit in my life. My theological understanding is deeper, broader and more nuanced. And one of my favorite things is spending time in God’s presence with His people at His table after preaching His Word.

The natural result is that the congregation I lead experiences the same. Most don’t know what “Anglican” means. They don’t care about the label. The bottom line is they’re learning to love the Lord more.

Every time someone walks through our doors, gasping for breath and says the equivalent of, “Finally, some sacred space to find rest and nourishment for my soul,” I wonder if that would be possible without the health, direction, formation and spiritual authority I’ve received from my crazy Anglican friends.

No witches yet. But it’s my joy to love and serve the spiritually beaten and burned-out sheep who have come home to find life in the river.

“They feast on the abundance of your house,

and you give them drink from the river of your delights.” – Psalm 36:8 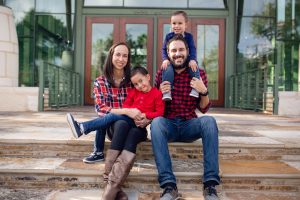 Drew+ Witt is the planter and Lead Pastor of Gathering Midtown Church in San Antonio, Texas. He’s a DIY maker, musician, artist and lawn care aficionado. Since 2002, his main passion has been to creatively speak the Words of Life in a way that would produce mature disciples of Jesus instead of religious nuts. Talking about Jesus and being a 21st century tour guide of the Scriptures are his favorite things to do. He and his wife Shari have two energetic sons and live in downtown San Antonio.