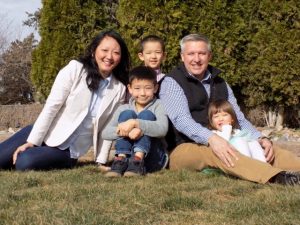 Jamie George, formerly with St. Andrews in Little Rock, shares his journey toward, and passion for, missionary church planting.

After serving in multiple churches and as a church planter, I discovered that God has graced my wife and me with the gifts to serve as missionaries. I know that many people believe serving as a missionary means being called to work in another country—I thought that way myself once—but that’s not always the case, especially when you live in the third-largest mission field in the world, the United States. And God put a calling on our hearts for a particular group here in America.

Although we were presented with an opportunity to serve overseas, we knew we were called to stay here and serve. Mentors encouraged us to pray and discern the specific place God would have us serve, and, after a lot of prayer and seeking wise council, we began the journey to start Front Range Mission in Colorado, with a bi-vocational missionary church-planting approach.

So, what’s the difference between a missionary planting a church and the usual North American church planter? A number of great resources seek to describe these differences; however, I like how Craig Ott and Gene Wilson illustrate three different church-planting approaches—pastoral, catalytic and apostolic (i.e., missionary)—in chapter five of their 2011 book, Global Church Planting: Biblical Principles and Best Practices for Multiplication.

Pastoral: This church planter seeks to start a church where they will become the pastor, and they probably will never reproduce (i.e., start another church). This is the primary way churches have been planted in North America in the last century.

Catalytic: This planter will become the pastor of an existing church, or help start one, seeing the opportunity to attract leaders to create other campuses of the existing church (e.g., a multisite church). Though this is less common, we do see this practice in North America. Historically, it is very rare for these satellite church campuses to plant a new church.

Apostolic: This approach is even more rare in the States, but not in other parts of the world. These church planters seek to reach the lost while identifying disciples whom God has gifted to lead new works. This approach tends to result in church multiplication, leading to discipleship that births new church communities that produce new disciples who lead, etc. Ott and Wilson say apostolic-type planters “aim to become facilitators of new churches instead of leaders of them.” I was recently discussing apostolic church planting with another disciple and he said, “that sounds a lot like New Testament church planting.”

In China and India (the largest mission fields in the world) followers of Jesus are primarily utilizing the apostolic/missionary church-planting approach to reach the lost and make disciples who make disciples. People are coming to faith and the indigenous people (elders) are being equipped to serve as the leaders, while they continue working at the jobs they had before becoming disciples. Maybe it’s time for us to consider utilizing this approach to “raise, release and support

[especially apostolic] leaders and communities of faith to reach the lost for Jesus Christ in America”* while we still have the freedom to do so.