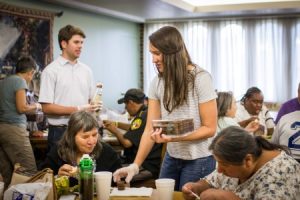 It’s a Thursday evening in Oak Cliff, an area in southwest Dallas. Members of The Well Community are gathering for their weekly worship service and fellowship dinner. For many, this will be their only hot meal of the week. For most, it is the only church service they feel they can attend, the only one where they feel welcomed.

As individuals who struggle daily with severe mental health difficulties and the related challenges of poverty, isolation and other physical illnesses, members of The Well Community are thankful to gather to worship and pray for one another, safe from the starring eyes of stigma.

Each week various area church groups, civic clubs and neighbors provide and serve the nutritious meal. This week it is a pastorate (small group) and others from All Saints Dallas. Ryan Flanagan, All Saint’s worship leader joins members of The Well to kick off the time of singing old, familiar hymns with gusto and joy.

For the time of Bible study often it is Dave+ Larlee, All Saint’s Vicar, who shares from the Word. But he is quick to point out that he feels more like the learner than the teacher when he comes to The Well.

Over the past four years, Larlee has observed members’ strong conviction that God is good, despite all they’ve experienced. “You get really

honest prayers that often begin with lament, but that always end with praise.”

Likewise, Larlee has witnessed members’ strong sense of hope, which he describes as “the joyful expectation that good is coming.” He’s also seen an abundance of grace, “that empowers members to be who God calls them to be.”

Larlee got into ministry among those whose struggle with mental health challenges while studying at Oxford, as he led a lunch ministry aimed at those who’d recently been released from prison, many of whom were dealing with serious mental health conditions such as schizophrenia, bipolar disorder and major depression. While interacting with those who’d been incarcerated and their families, he got a taste of the spiritual needs of people who deal with these conditions.

Now, as he preaches from time to time at The Well Community, Larlee sees both the spiritual needs of members and the encouragement they bring to him. “I thought I went to help them, but they help me,” he shares. “I get so much more from them than I’ll ever give. It’s the economy of God’s kingdom.”

All Saints volunteers echo that sentiment as they dish up dinner and carry trays to the tables. “This is where Jesus is tonight,” says one, “and as we serve with Him, we get to partake in his love through this community, through these, his people.”

(Portions of this article are taken from an interview with Dave Larlee by The Well Community.)