Mental Health and the Church 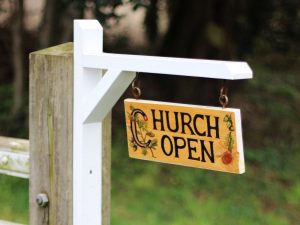 ay is “Mental Health Awareness Month” and to help you and your congregation to learn more, we asked Carol Dowsett, the AMiA Communications Coordinator and an author and advocate for families dealing with mental illnesses, to share some thoughts. Carol also taught a breakout session on the Ministry of Mental Health at the 2018 Winter Conference. To listen to that, click here.

The air was full of compassion that afternoon as the visitor unfolded her story to the women’s small group Bible study. Her daughter had been recently hospitalized, again, for a chronic illness so debilitating she is often unable to get out of bed. She is in so much pain that she cannot care for her small children, cook meals for her family or participate in any events. As tears escaped down her cheeks, the visitor explained how this trip to ER was the third one in four years.

Each woman leaned in, listening with deep care. A few nearby patted the lady on the shoulder. Someone suggested they should pray, and so they did, with generous faith. Then someone asked the visitor where the daughter had been admitted. “Highlands Psychiatric Hospital,” the visitor whispered. Within moments the compassion in the air shifted, replaced with a pall of stigma and confusion.

Rejection of those with certain kinds of illnesses is an old blight, and at the time of Christ there was plenty of it blowing around. Lepers, barren women and the poor were all victims of stigma, as were the deaf and the blind.

In the ninth chapter of John’s Gospel we see Jesus confront, head-on, a community’s attitude toward its outcasts, while at the same time doing what He does best: healing. He heals blindness—two kinds of blindness. First and obvious, he gives sight to a blind man. But another and important miracle happens as he exposes and begins to heal the blinding darkness of stigma borne by the man’s family and neighbors.

In Jesus’ day, illnesses were often attributed to sin. So the disciples’ question was not, “How did this happen?” because they thought they had already figured that out. They were sure the cause was sin. They just wanted Jesus to help them ascribe blame to the right party. Their question was, “Who sinned, this man or his parents?”

Jesus would have none of it. “You are asking the wrong question,” he responded. He knew the question arose from wrong assumptions—presumptions based on ignorance and stigma.

A similar area of blindness in our contemporary Christian communities is how we view those dealing with mental illnesses. Like the disciples, our assumptions are often based on ignorance and stigma, and our wrong questions reveal that. What are some right questions, productive questions, that would help us clarify the confusion still existing around the issue of “mental illness”? Let’s consider the following:

What are mental illnesses?

Mental illnesses are medical conditions. They are disorders of the brain. Like the diabetic who has a malfunctioning pancreas or the person whose autoimmune system has failed, those with mental illnesses have a part of their physical bodies that isn’t working as it should.

Think of all the functions our brains perform! When some parts of the brain aren’t able to do some of those things, then the ways we think, how we feel and express emotions and even our ability to relate to others and perform daily functions can be severely disrupted. Like other parts of our bodies, the brain is “fearfully and wonderfully made”—incredibly complex. Depending on which section is malfunctioning and what kind of brain chemicals are behaving badly, mental illnesses manifest in different ways. So, there are lots of different diagnoses and labels used to describe various mental illnesses, including depression, schizophrenia, bipolar, obsessive-compulsive disorder (OCD) and post-traumatic stress disorder (PTSD).

Like other sicknesses, such as diabetes, there is no cure for many kinds of mental illnesses. They are chronic and debilitating. However, like other medical conditions, with the right medical treatments and support from loved ones and the community, mental illnesses can be managed and individuals can live meaningful lives.

Who does mental illness impact?

These illnesses impact the young and old, poor and affluent, less educated and highly educated, men and women—touching lives in all nations, of all races and religions. Mental illness is also widespread throughout society. In fact, in the United States, it is estimated that 43.8 million Americans (one in five) experience mental illness in a given year, significantly more than the number who live with diabetes (25.8 million), nearly twice the number who have ever be diagnosed with cancer (22.9 million) and about 40 times those diagnosed with HIV/Aids (1.1 million). Each year more than 41 million people in the United States die by suicide, and it’s estimated that 90 percent of them suffer from mental health conditions.

In addition to all these groups of people who are impacted by mental illnesses, there is yet another segment of society we need to know about. This group can be as much as 20 times larger than the population suffering with mental illness. It is a quiet and invisible group, and its members are weary and courageous. These are the families—spouses, parents, children, siblings—who care for loved ones.

How should the Church respond?

We have seen that the community surrounding the man with illness in his eyes responded to his needs with ignorance and stigma. Jesus responded differently. How should we respond to people with illnesses in their brains?

The blind’s man family was treated with suspicion and blame. But Jesus took another approach. How will we support families who support their loved ones?

As with all Kingdom love, we respond first out of the right heart, then with the right ideas and finally with the right actions. As Matthew Henry, an early 18th century British minister and Bible commentator noted:

Let us learn how to value our own reason, and to pity the case of those that are under the prevailing power of melancholy or distraction, or are delirious, and to be very tender in our censures of them and conduct towards them, for it is a trial common to men, and a case which, some time or other, may be our own.

With even greater simplicity, Jesus reminds us that we should care for those society has given up on, such as the naked, the hungry and the imprisoned, as though we are caring for Him. Mother Teresa showed us how to love this way through her life and in her prayers:

Dearest Lord, may I see you today and everyday in the person of your sick, and whilst nursing them, minister to you. Though you hide yourself behind the unattractive disguise of the irritable, the exacting, the unreasonable, may I still recognize you and say: “Jesus, my patient, how sweet it is to serve you.”

Once our ignorance is addressed and our compassion is ignited, there are some practical ways a church can help overcome stigma and reach out to those living with mental illnesses and their families. Here are some ideas:

In the story of the blind man, what if the community had not been so concerned with assigning blame but instead had been consumed with administering love? What if their question, instead of, “Who sinned?” was, “How can we help?” Perhaps instead of investigating the healing, they would have been participating in it.

Which question is yours?

Resources for those with mental illnesses and their families:

What is your Galilee?

Engaging the Next Generation: Recommended Resources for Children’s Ministry

Alpha: A Tool for Transformation

Redemption in the Wake of a Hurricane