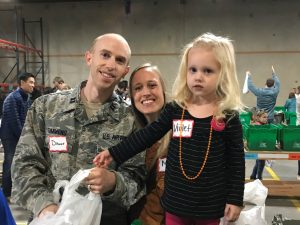 It was during a talk by Reggie McNeal during the Anglican Mission in America’s Winter Conference in 2012 that Leslie Kingman first felt God put the burden on her heart. Reggie’s admonition that the church should be a community that shows the love of Jesus, coupled with learning about a program that provided food for hungry kids on the weekends, planted the idea that her church, Grace Northridge, could have a new ministry in San Antonio. The church was already reaching out periodically at a local elementary school and members had been looking for a way to be involved on a more ongoing basis.

After returning home, Leslie discovered Snack Pak 4 Kids in Amarillo, which sends bags of food home with children who are food insecure on the weekends. Leslie and others in her church were drawn to this program because they saw how it was consistent with the way in which they wanted to portray the love of Christ: by giving of their first fruits. “It’s not what’s left over in our pantry, it’s our best,” explains Leslie. “The kids were valued and important.”

In 2012, Grace Northridge founded Snack Pak 4 Kids San Antonio based on this model, and began serving children at nearby Lamar Elementary. Leslie estimates that 10-20 percent of the children at the school who qualify for free lunch may be food insecure on weekends. “They are kids who are slipping through the cracks,” says Leslie.

Each Friday, these children receive a bag of items like juice boxes, milk, beef sticks, cereal and applesauce, discretely placed in their backpacks by their teachers. The food they receive is chosen not only to provide them with nutrition but to communicate that they have worth. Leslie explains that for many of these young people, the television is their only confidant. As a result, she says, “They equate value with things they see on TV.” 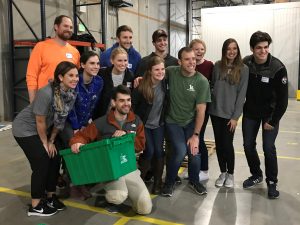 Since 2012, the program has grown to serve 1,900 children attending 22 schools in four school districts. Churches and other entities such as rotaries, businesses and parent groups “adopt” a school, providing volunteers and paying for the food given to children at that location. A matching grant program covers up to half the cost of the snack bags for groups that would like to serve a local school but can’t. This grant program allows these groups to serve while gaining buy-in from their members for Snack Pak 4 Kids. But, Leslie still has a list of schools that would love to participate, but haven’t yet been adopted. “The schools ask for this program,” she says.

Preparing snack bags for this growing number of children is a group effort, involving volunteers ranging from empty-nesters and families with young children to rotaries and groups from area businesses. One Monday a month, volunteers unpack the food that’s delivered so it can be divided into bags for students. The next morning, a volunteer special needs group arrives to help pack the bags, and the evening after that larger volunteer groups gather to finish assembling the Snack Paks. Later in the month, moving companies donate time and drivers to deliver the bags to area schools. And, each Friday, volunteers distribute the snack bags to classrooms.

Leslie sees providing this food as a way to help set up children for success. “You can cope with life better if you’re not hungry.” Young people who aren’t dealing with hunger face fewer barriers to learning: They’re more likely to stay in school, miss fewer days and have better concentration and higher self-esteem, Leslie explains. “Their chance to lead healthy, productive lives increases.”

Teachers see these benefits firsthand. In a survey from the 2016-2017 school year, a majority recognized a decrease in absenteeism, as well as improvement in academic performance, behavior, health, participation and concentration among students who received Snack Paks. One teacher shared, “My students looked forward to getting their snack packs every week! I know that they relied on the consistency of the program. I think this improved their attendance, especially on Fridays, which can often be a day when kids miss school.” Another added, “Several of my students were in need last year and that need was met with kindness and dignity. Our wonderful students are blessed by your program and by the intelligent people running it.” 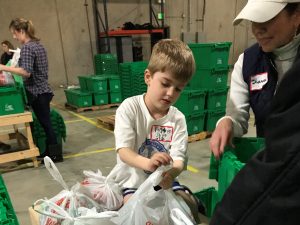 The snack bags provide a wealth of opportunities to reach out not only to students but to teachers as well, as educators witness volunteers demonstrate God’s love week after week in a very practical way. One teacher shares, “I believe the volunteers of this program are God-sent, or at the least, saints. They have had a big role in the success we have had this school year because of the value they have placed on meeting the basic needs of students who may be at a disadvantage. I feel reassured to know that the students who are a part of this program are now happier, better prepared, healthier, and have a better chance to succeed in school.”

Leslie recognizes that Snack Pak 4 Kids is a great fit for a church that’s part of the Anglican Mission in America, as it helps to lay the groundwork for planting other churches and growing faith communities. The program is a great evangelism tool, she says, explaining that demonstrating the consistent love of Christ over and over is key. “There’s not a breakdown in God’s love to us. It’s how we demonstrate God’s faithfulness. … What better way to plant those seeds?”

Leslie explains that often, churches are involved in “drive-by” ministries—for instance, delivering Thanksgiving turkeys or holding a coat drive. But, Snack Pak 4 Kids provides a way for churches to serve their communities with the consistency that fosters relationships and communicates God’s steadfastness. “Our message should be God’s message,” Leslie shares. “His message to us is, ‘I’m here always. I’m not going away. You can run away, but I’m still going to be here and give you my very best.’”

Leslie admits that sharing the love of Christ through consistency is a slow process. But, she hopes and prays that some of the children who receive Snack Paks will begin to wonder who has been providing food for them and want to know why. And, she’s asking the Lord “that we’ll have capacity and favor to grow in a manner that reflects His faithfulness, His love, His graciousness, His consistency.”

To learn more from Grace Northridge about the Snack Pak ministry, please write to info@GraceNorthridge.com.