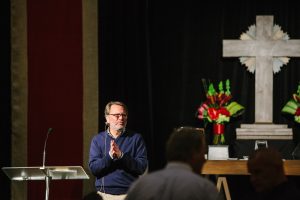 When I think of Good Friday, the word that most clearly comes to mind is surrender. I hear the echo of Jesus’ words as He prayed this most intimate prayer to His Father: “Abba, Father! All things are possible to you; take this cup away from me; yet, not what I want, but what you want.” (Mark 14:36) Every time I read this prayer, I cannot help but feel the tension of the call to surrender my will to God’s will.

This is no easy task and it was no easy task for Jesus because He knew what the cup represented. The cup that Jesus is speaking about is the cup of God’s wrath. Jesus knew that His mission was to drink the cup of God’s wrath, the cup that was meant for you and me. I love what Sinclair Ferguson wrote about this scene: “Everything in Jesus longed to escape from this terrible experience seen in its own light; yet everything in Jesus also longed to be obedient to the Father—and in that light, he bowed before him, praying, ‘Not my will, but your will be done, Father.’ So he took the cup.”

It sounds like a bizarre mission. All other world religions see no need for the sin-bearing death of a savior, though some recognize Jesus as a great man. Yet no other world religion sufficiently deals with the greatest human problem: sin. But in surrendering to His Father, Jesus dealt with our greatest need.

As Jesus surrendered to His Father’s will, He ended up on the cross and died. I don’t know about you, but this does not make surrendering to God very appealing. You call me to surrender and then I die? But … that was not the end of the story! Through Jesus’ death came resurrection! God brought glory, life and victory from what presented itself as the greatest tragedy!

I want to live a life surrendered to the Lord, but the reality is that I find myself fighting against it over and over again. I know the struggle. I would bet that you do as well. But more importantly, Jesus knows the struggle of surrender. His vulnerability in the struggle helps me to be vulnerable and real with my struggle to surrender my will to my Father’s will.

Living a life of surrender to the Lord doesn’t mean that you always want what He wants. But it means that we must ultimately come to yield to His will. Like Jesus, when we know who our Heavenly Father is, we realize that surrender to His will is the only way. Even in the midst of our own struggle to yield to God’s will, we can trust that blessing and life come from it.

In the garden, Jesus anticipated the wrath of God, and on the cross He fully experienced it so that you and I don’t have to! On the cross, Jesus drank the cup of God’s wrath so that you and I could drink the cup of His grace, which is what we celebrate every time we gather around the communion table. May the path of our lives as we follow Jesus be the path of surrender.