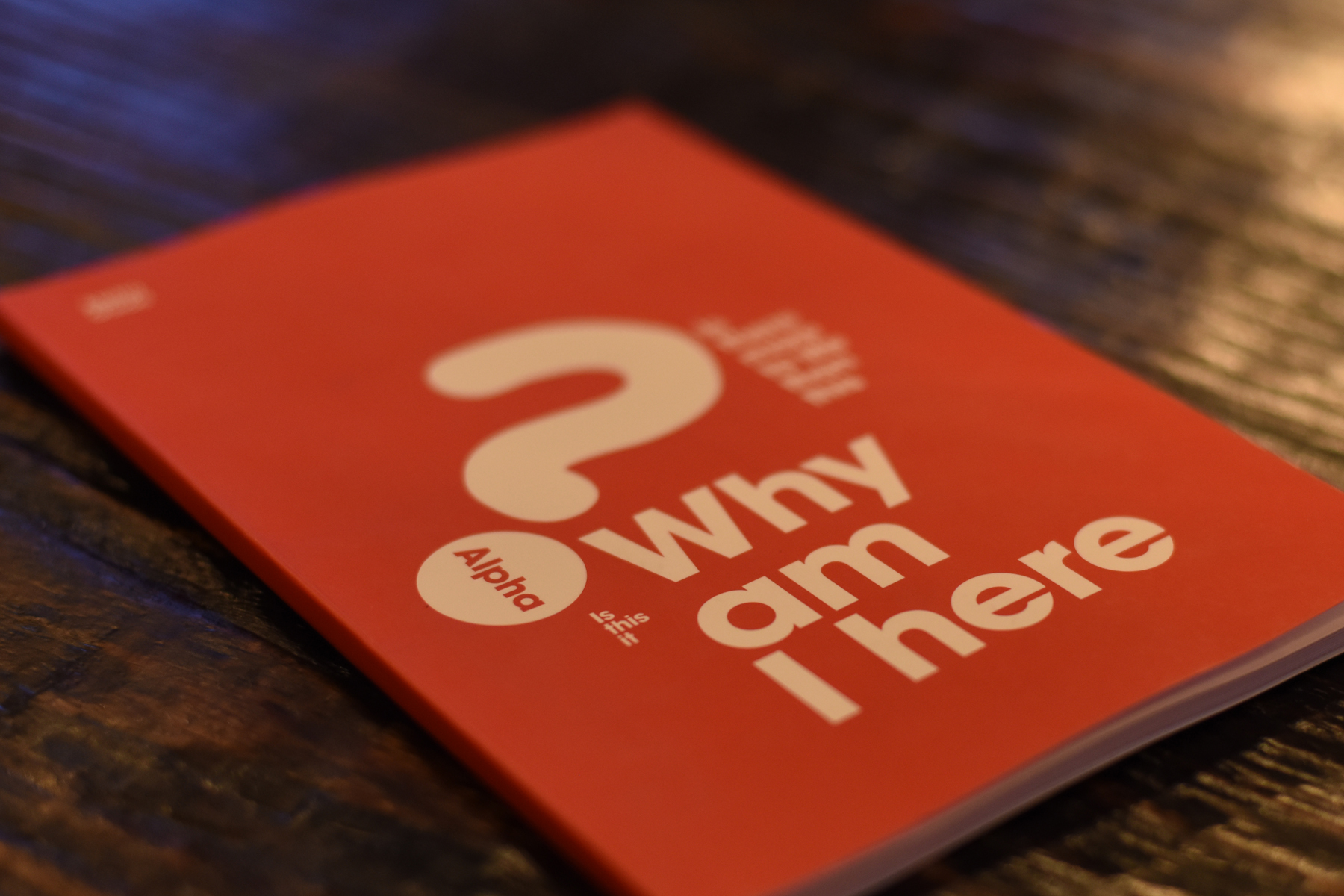 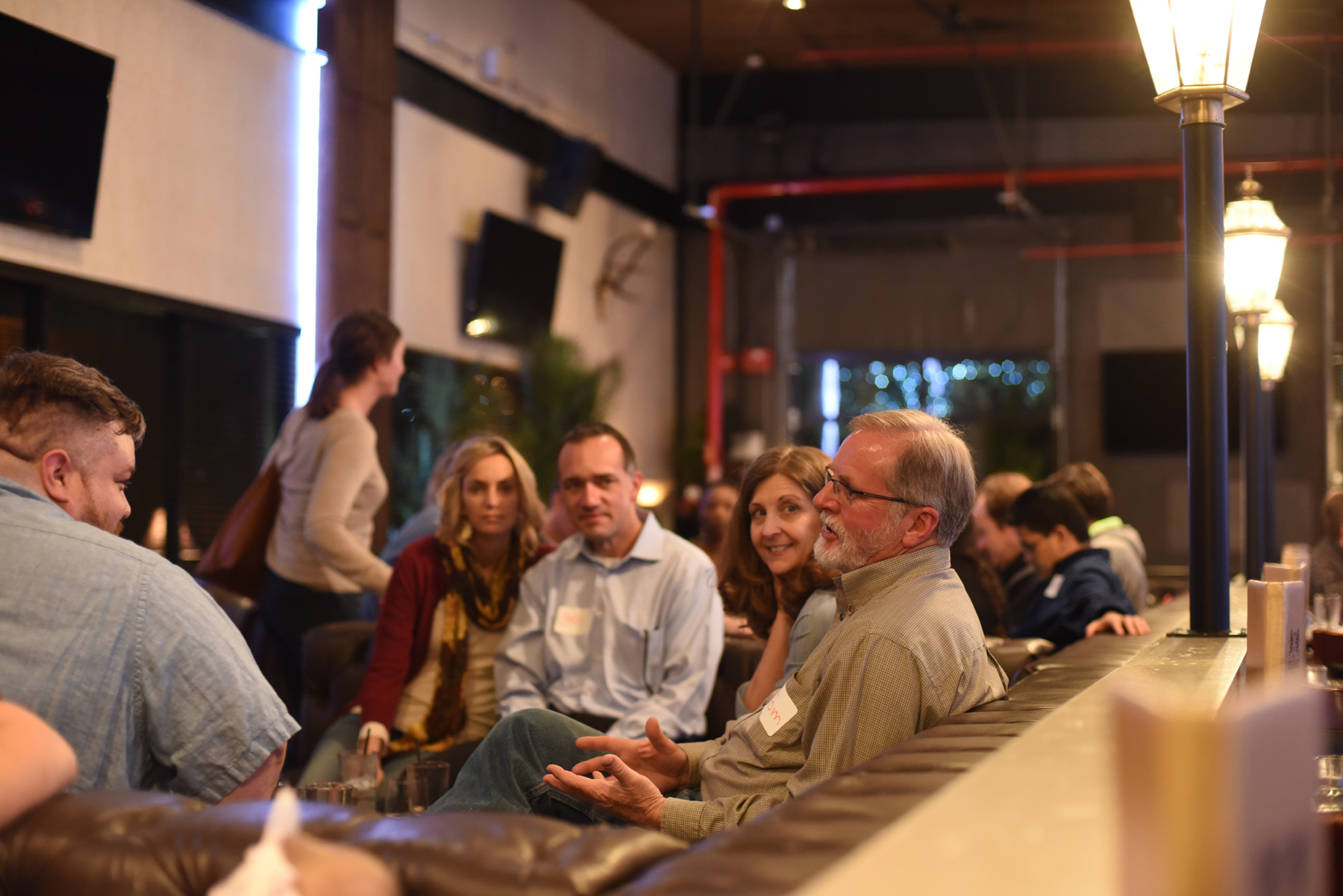 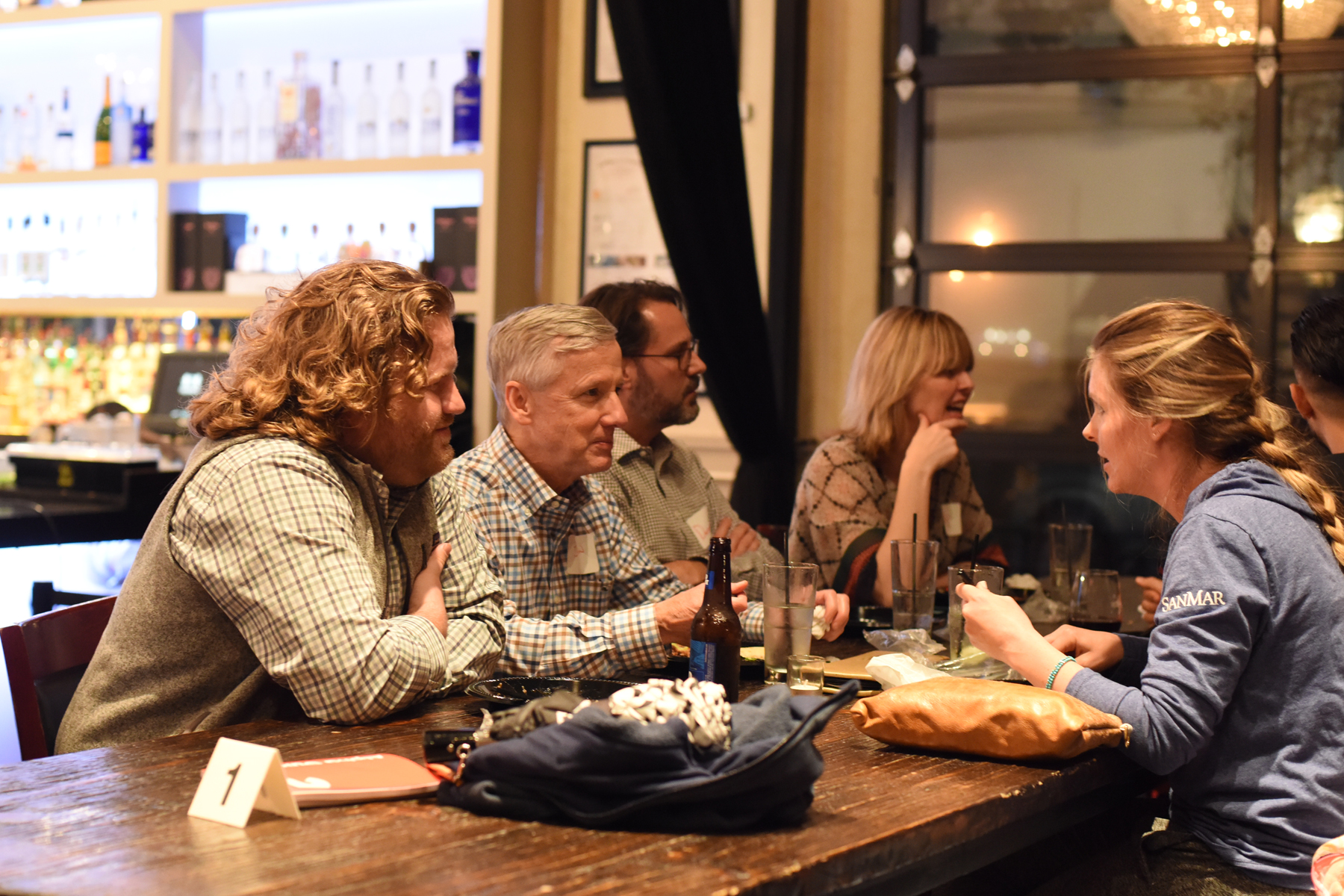 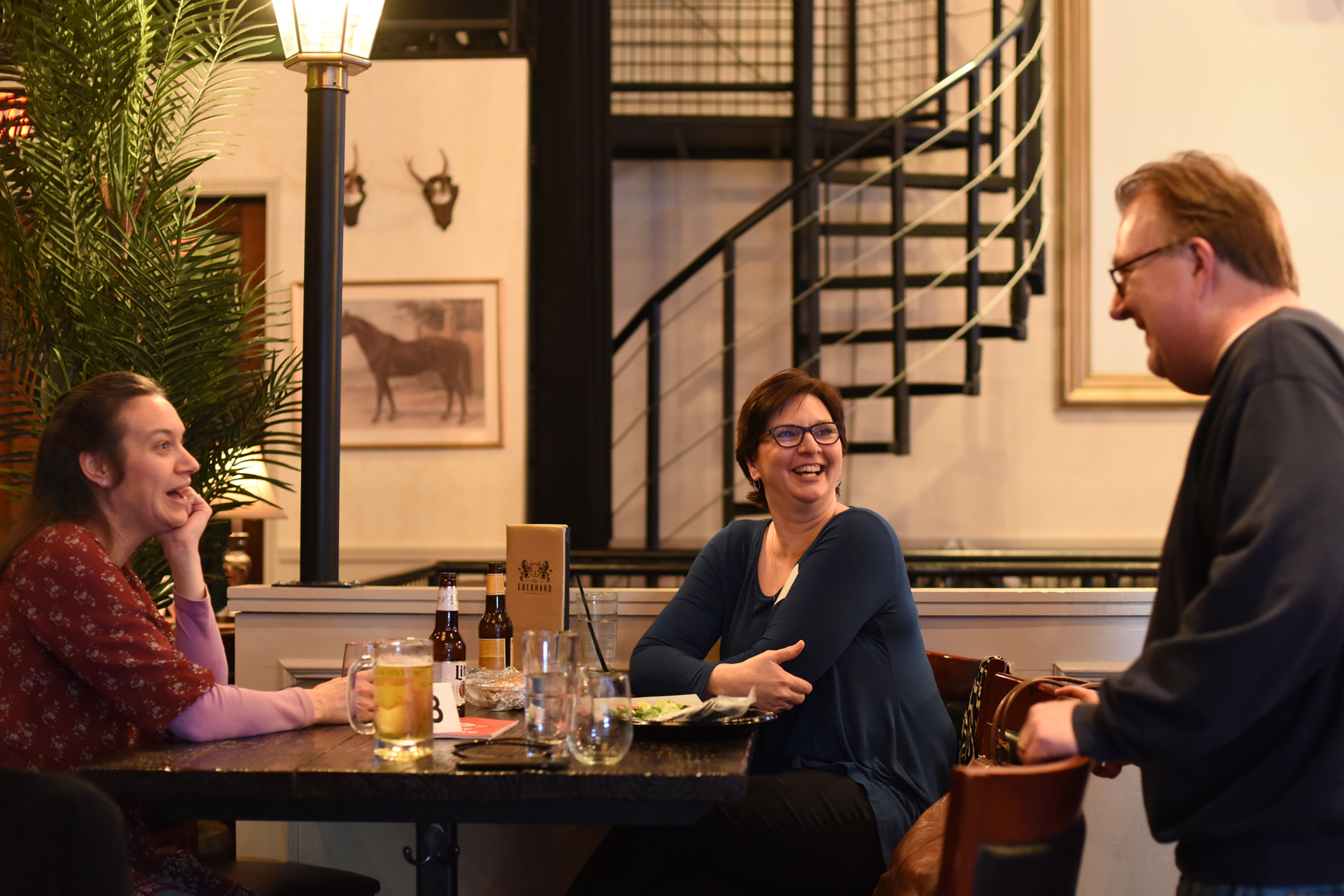 On Tuesday nights at a bar in Dallas, a group of over 100 people from diverse worldviews and backgrounds gathers to share food and discuss matters of faith. During each session of this 10-week Alpha Course, hosted by All Saints Dallas, participants listen to a 30-minute talk that addresses a big question about Christianity such as, What is faith?,” “Who is Jesus?” and “Why did He have to die?” Then, they break into smaller groups to discuss the topic at hand; and all viewpoints are welcomed. Dave+ Larlee, associate pastor of All Saints Dallas, shares with us how Alpha provides a unique opportunity for people of all backgrounds to experience Christian community.

Dave+ was first drawn to Alpha’s unique approach when a church he attended in the U.K. offered the course. “It was one of the first times I saw the tools the academy used to communicate the Christian faith,” he recalls. “It wasn’t the closed loop of ‘to have faith you need to have faith.’”

As he saw how Alpha not only allowed participants to explore the big questions of life but also to experience Christian community, Dave+ was inspired to enable others to experience it. Now, as he leads Alpha Courses at All Saints Dallas, he is witnessing God at work as people are introduced to principles of the Christian faith and the body of Christ in an open environment.

When All Saints Dallas started holding Alpha, the course met in the church basement. But, Dave+ recalls, they weren’t very successful at attracting those from outside the church. However, two years ago, they moved the Alpha group out of the church and into a local wine cellar. Now, two-thirds of those who attend are agnostic, atheists and those who have stopped going to church. “People have a sense of confidence in inviting friends and colleagues,” Dave+ explains. Church members who invite others are encouraged to attend the first night, and some stay for the duration of the course.

The group has since outgrown the wine cellar and now meets at The Eberhard, a Dallas restaurant and nightclub. On the first night in this new location, attendance soared, jumping from an average of 60-80 people to 130.

Interaction and relationships play a big role in drawing participants to Alpha and beckoning them to return, and many participants build friendships that continue when the class is over. Dave+ explains that group dynamics are a key aspect of the course. “Hospitality is a key value.”

Dave+ sees that Alpha Courses are a good fit with the church-planting emphasis of AMiA, and explains that Alpha excels at three things. First, he says, “It enables the church to become outward-looking.” Alpha provides a way for church members to get involved in sharing the gospel in a way they can get their heads around. It’s not about being able to give the perfect argument in favor of the Christian faith, but about hospitality.

Second, Dave+ shares, “It gives people a safe, accessible way to encounter the Holy Spirit. It’s an incredible opportunity to really foster the renewing work of the Holy Spirit within the church.” In a church like All Saints Dallas, where members come from a wide range of backgrounds, this is an especially valuable opportunity.

Third, “It’s an incredible means to train and identify new lay leaders.” Dave+ recalls that while serving in London, he saw an Alpha group leader excel in this role, which prompted him to take a leave of absence from work and pursue theological training. This man is now leading a church in the U.K.

Dave+ has seen leaders emerge in Dallas as well. For some the experience has given them confidence to lead in other contexts, such as in the workplace.

Every Alpha groups has two leaders, who facilitate the conversation, and two helpers, who focus on extending hospitality. To ensure that guests have ample opportunity to share, the helpers offer limited input in the discussion and instead focus on praying quietly during that time. “We want to hear what [participants] believe,” says Dave+. “It creates an incredible environment. … All worldviews are welcome.”

From the fifth week on, lay people give the talk that precedes the discussion time, sharing on topics such as reading the Bible and prayer. Dave+ has noticed that participants seem to pay special attention to these presenters as they are everyday people who are living out their faith rather than clergy.

Dave+ shares that the hardest part of every course is when he sees an empty seat that had been occupied the week before. One characteristic that makes Alpha unique is that there is no follow-up for participants who call it quits. “When people don’t come back, it’s heart-wrenching,” he admits.

But, of those who do stay, some not only stay for just the 10 sessions, but return for the next Alpha Courses; and some become leaders. The first night of each Alpha Course, participants are presented with the question, “If you could ask God any question and get a response, what would you ask?” Three courses ago, one man answered with a string of expletives toward God. “He clearly didn’t believe in God, was clearly very angry,” recalls Dave+.

But, he came back. During his second Alpha Course he shared over a meal that although he hadn’t wanted to receive prayer during one of the sessions, he had allowed had others to pray for him. He explained that he had been dealing with a lot of guilt and shame about his past, and realized a week after he had been prayed for that this guilt and shame was gone. Although he’s still not sure about Jesus, he continues to attend.

Participants who have had a good experience are sometimes asked to serve as helpers, even if they haven’t embraced the Christian faith. “They’re very helpful in group discussion,” says Dave+. “When they’re invited to be part of the team, something significant usually happens in that course.”

Dave+ also often sees God work in big ways through the one-day Holy Spirit Retreat that takes place during each Alpha Course. Often held on a weekend, it explores questions such as “Who is the Holy Spirit?”, “What does He do?” and “How can I be filled?” The prayer time held during the third session of the one-day retreat looks at being filled with the Holy Spirit, and it is always the highlight of the day and often of the entire course for Dave+.

In addition to giving All Saints open doors to impact the lives of participants, Alpha has also provided opportunities to reach out to those who work at the restaurant. “Conversations with staff are phenomenal,” says Dave+. “The Lord is really doing work in them … They’re obviously experiencing something: authentic Christian community.”

After a recent session that asked the question, “Does God heal today?”, a waitress shared with Dave+ that normally she didn’t pay attention to the discussion, but that night she had listened to every word and had no idea what she had just experienced. “A presence filled me when you prayed,” she said. “I’ve never felt so amazing in my life.” Dave+ had the joy of sharing with her that the Holy Spirit had just made Himself known. “She was just gobsmacked,” he recalls, adding that this waitress has now requested to work on Alpha nights.

Although Dave+ has been involved in over 40 Alpha courses, he says he is continually surprised. He encourages others not to make assumptions based on the way a person presents himself or herself, and recalls a woman who participated in the last class. She had been a member of a church for all her life, but had no idea that Jesus was inviting her into a loving relationship with Him. “That’s a great surprise!” exclaims Dave+.

Posted in Church Life, Evangelism and Outreach and tagged All Saints Dallas, Alpha