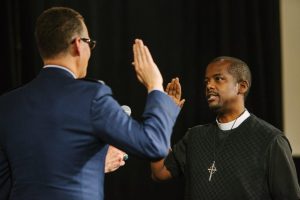 Jay+ has been part of a church for as long as he can remember. “We were the family that if the church doors were open, we would find a reason to go; if they were closed we were still going to try to find a reason to go,” he recalls.

After studying science in college for a while and getting involved in campus ministry, Jay+ realized that his call was to minister not through medicine, but through providing spiritual care. God used the counsel of one of his professors at a secular school to lead him to change his major and to pursue a career in ministry after graduation.

However, Jay+ still had many unanswered questions as he considered where and how God wanted him to serve. In 2001, he returned to Nashville following his college graduation and began working at the church where he first felt a call to serve.

As a member of the staff at Christ Church, Jay+ was involved in children’s ministry and then moved into youth ministry. “It was in that time that I realized ministerial call is about more than just children. It was about families,” Jay+ shares. “It was about true reconciliation, helping an individual come into a reconciled relationship with themselves, reconcile with their community and reconcile with God.” 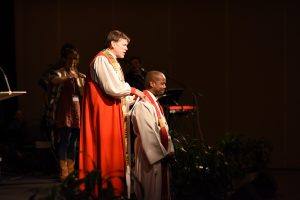 +Philip Jones blesses and welcomes Jay+ as an AMiA chaplain

Jay+ developed a heart for helping not only individuals but entire families pursue this reconciliation. “God uses the family, calls the family and calls us into family … I really believe in the idea of us being a unified people.”

After several years at Christ Church, Jay+ was challenged by +Dan, now senior pastor, to broaden his ministerial abilities. His wife also encouraged him to consider returning to school. Together they sought God’s guidance. Numerous factors needed to fall into place to make it possible for Jay+ to continue his education. He recalls, “I challenged God like a fool, and said, ‘God, if that be the case, A) I need to be accepted, B) I need to the time to do it and C) I need the finances. … Every one was answered.'”

Jay+ was accepted to the Master of Divinity program at Vanderbilt Divinity School, and was offered a sizeable-and completely unexpected-scholarship. He was able to adjust his schedule so he could continue to work while going to school full time. “All the things I thought I could put in the way of what God was doing, God completely answered and knocked down any barriers,” says Jay+.

During his studies, Jay+ was introduced to chaplaincy and served in a local hospital. He found that was a good fit. “There’s something about the accessibility to ministry opportunities that chaplaincy provides on a day-in, day-out basis.” A residency at the Veteran’s Administration hospital in Murfreesboro, Tennessee solidified this call. “To be in a room with [veterans] and say, ‘God hasn’t lost faith in you, and God hasn’t lost love for you,’ really lifted their countenance.”

Now, God has opened doors for Jay+ to serve as a chaplain in the U.S. Air Force. At Winter Conference, AMiA Chaplain LT. Col. Darren Duncan formally commissioned him as a First Lieutenant and +Philip Jones blessed and welcomed him as an AMiA chaplain. Jay+ will soon begin training in Montgomery, Alabama, and then will report on May 1st to Tinker Air Base in Oklahoma City. As he looks ahead to moving with his wife and his two children, ages 5 years and 21 months, Jay+ trusts that God will continue to prove His faithfulness. “It’s been kind of nerve-wracking at times, admittedly,” he shares. “But, in the end, we serve a benevolent God. I know that God is real and this call is nuancing in ways that have proved that benevolence.” 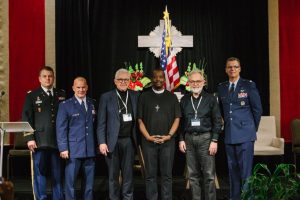 Although all of the details aren’t yet clear, Jay+ is looking forward to reminding airmen and their families that nothing can separate them from God’s love. “I hope to work with those who have felt like what they are doing has caused them to lose any favor with God or caused God to turn away from them.”

Jay+ also sees how serving as a chaplain will allow him to fulfil his leading to bless entire families. “One of the calls of the ministry of chaplaincy is not just for the spiritual needs of airmen, but also for their families, and to the community,” he explains. But, he adds, “I’m certain that God is going to keep me kind of surprised as to what endeavors are available. I’m looking forward to being God in the flesh as best I can.”

As Jay+ steps into this new role, he’s also eagerly anticipating getting to know the other military chaplains serving with AMiA. “I think that’s a special opportunity, especially for me coming in,” he says of joining this tight-knit group.

Jay+ believes that serving not only as a military chaplain but as part of AMiA will give him something unique and valuable to offer: the three streams model, which he said fits perfectly with his desire to see individuals be reconciled to themselves, to their communities and to God. “I do hope that we have more military chaplains that come out of the Mission, because the Mission’s model of three streams has a lot to offer chaplains, not just in the military, but in civilian life as well. I’d love to see [AMiA] chaplains in prisons and in hospitals because this is a life-giving way of doing ministry.”