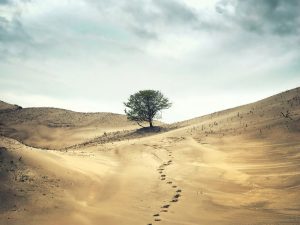 As we enter Lent, we consider what it means to put earthly things to death. This week, Chris+ Myers, Associate Rector of St. Bartholomew’s in Dallas, suggests questions we should ask ourselves in this season.

“Put to death therefore what is earthly in you: sexual immorality, impurity, passion, evil desire, and covetousness, which is idolatry. … Put on then, as God’s chosen ones, holy and beloved, compassionate hearts, kindness, humility, meekness, and patience, bearing with one another, and if one has a complaint against another, forgive each other, as the Lord has forgiven you, so also must you forgive.” Colossians 3:3;12-13

There is a steely-eyed realism to Lent, beginning as it does on Ash Wednesday with that solemn remembrance of our mortality: “Remember that you are dust, and to dust you shall return.” To be marked with ashes in this way, to take heed that we are in fact mortal, is our individual and communal acknowledgement that death is the consequence not ultimately of natural causes but of sin. The ashes speak to our mortality and to our estrangement from God without Christ.

For this reason, some might see Lent as needlessly morose, since we have all been forgiven after all. Truly, we have been forgiven, and our forgiveness is precisely the basis of our ongoing formation into the image of Christ. According to Paul in Colossians 3, it is those who have been raised with Christ, those who have been forgiven, who are called to continually put to death what is earthly in us. Lent is a season when we seriously consider what is earthly in us and what it means to put those things to death.

True, the act of putting to death earthly things in us is the continual call of Christians; but the season of Lent offers an especially intensified period of time to do this. In many ways that is what the church calendar does. Each season brings to mind in intense and vivid ways some aspect of the Christian life and some particular dimension of God’s character. In Lent, we focus on our fragility, our mortality, our need for forgiveness and healing because we are simultaneously focusing on the forgiving and gracious nature of the God we serve. Lent, in other words, is a season to pay attention to those earthly things in us that need to be put to death, so that we might continue to put on Christ.

The dynamic of putting off the things of the former self and putting on Christ is one of the reasons we fast during Lent. Fasting itself is a means of putting off earthly things, of signaling to God that we are serious about putting to death those things in us that are sources of death themselves. Many will choose to fast in some way during Lent. From my personal and pastoral experience, I would heartily recommend that you do fast from something during Lent. While fasting can never obligate God to us, He very often graciously responds to our willingness to give up something for Him. In fasting we turn the volume down on certain appetites by saying no to things we typically would say yes to, and in so doing we turn up the volume of our own attentiveness to God. When we fast from food or from certain types of media or from anything, we are saying to the earthly things in us that they are not ultimate. We say to God by fasting that we want Him to be our ultimate satisfaction.

In addition to fasting during Lent, some choose to take on a spiritual practice of some sort, such as almsgiving. For example, some who fast from food during Lent not only dedicate the time they would have spent eating to prayer, but they also save the money they would have otherwise spent and donate it to their church or to a charity. There are any number of examples of things to fast from or of practices you could take on in this season. My hunch is that if you spent a few moments in prayer, you would have a strong sense of the appetites God might be asking you to say no to in this season. I encourage each of you to take the time to do this. The Lord in His grace wants to meet with us during Lent. He wants to continue to form the image of His son in each of us. Paul reminds us of this in the same passage from Colossians: “You have put off the old self with its practices, and have put on the new self, which is being renewed in knowledge after the image of its creator.” (Colossians 3:9-10)

As you enter into Lent, consider asking these questions in prayer:

What might the Lord be asking me to put to death?

What might He be asking me to take on?

Transformed and Renewed by the Eucharist

Learning to BE, A New Book by Chad+ Jarnagin

Keepers of the Vision

From the Apostolic Vicar: The Balance of Three Streams

Connecting at the Table: Luminous Parish