Partnering in a Christ-Centered Endeavor 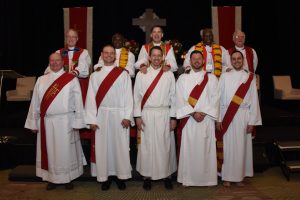 After growing up Catholic and working in Baptist and non-denominational churches for several years, Mark+ Walz of All Saints Dallas was introduced to Anglicanism through his wife’s family. Last spring, as a newly ordained deacon, Mark+ shared how discovering The Anglican Mission and the three streams felt like coming home. Since then his sense of belonging has grown to include not only a growing appreciation for the ways in which sacrament, scripture and Spirit harmonize, but also meaningful connections with others of like mind.

In November Mark+ was ordained to the priesthood, and he’s gearing up to serve in church-planting ministry in North Dallas. We talked with him about his past year of ministry and what he’s looking forward to in his new role.

Ministry at All Saints Dallas has brought Mark+ what he describes as “a challenging but good surprise.” He’s found that the community at this church is bigger and broader than he expected, encompassing a wide range of people with diverse backgrounds, political views, talents and giftings, while remaining orthodox and Christ-honoring.

Within this diversity, Mark+ has experienced the harmony that results when communities of Christians seek to serve God together. “The people who’ve come alongside me and my wife have felt like long-lost family and friends. They share the same passion; we fit together well and they seem to be going in the same direction.”

In recent months, Mark+ has been tasked with heading up a team to connect with the new neighbors All Saints Dallas will have when the church moves to a building downtown. He says this experience is great training for his church-planting ministry in North Dallas. In leading this team he’s been blessed to serve hand in hand with many of the laypeople God has brought to All Saints. “I’ve been completely humbled and honored to work with them. Each has their own story with God. It feels like I’m doing ministry alongside real, present-day saints.”

As he’s spent time with the body of Christ at All Saints, Mark+ has seen how the Lord has equipped them for ministry. “God has gifted them and called them to very important tasks,” he says. For example, he shares that he’s worked with a young woman named Anne who has a methodical, deliberate, spiritually-guided approach to networking, thanks to her background and training. “I never thought about how to do it methodically,” Mark+ admits, and he’s appreciated the ways in which believers like Anne use their unique abilities to serve.

As Mark+ looks ahead, he recognizes that church planting is a daunting task—one that no person could accomplish alone. But seeing members of the body of Christ minister together has left him encouraged rather than overwhelmed, and he’s looking forward to seeing who God will lead to join in his North Dallas church-planting ministry. “I’m anticipating that God will call people I’ve never met to help plant the church.”

Mark+ shares that in the year to come, he’d like to continue to learn to weigh the importance of trying to control all the details, and to trust God over the pursuit of perfection. “I’d prefer to win people into the mission and vision of what we’re trying to do, and then leave

[the details] to the Spirit of God,” he shares. His biggest prayer request is that he, his wife and his team will continually seek to be in God’s will, and not allow human desires to get in the way.

As he seeks to approach a new stage of ministry while holding the details with open hands, Mark+ recognizes that the task before him won’t be accomplished through human effort and perfect planning. “Church planting is a pretty fantastic and audacious mission. There are—as is the case with anything else—tons of things that can go wrong. If we look at it from a human perspective, it’s an endeavor to do everything perfectly. There’s no way to do that.” But, Mark+ explains, it’s not a human endeavor, but rather one that’s centered on Christ and the Holy Spirit. “If it’s God’s work, the human part will be overcome.”