Prayer and Healing Ministry Team Training at Winter Conference 2018: A Time to Listen and Be Heard 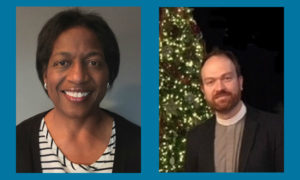 We invite everyone to join us for Prayer and Healing Ministry Team Training at Winter Conference Wednesday, January 24. This week, we talked with Shawne+ Brown and Sheridan Banks of Christ Church Nashville, who will be leading this training. They shared their experiences with God’s responses to prayer and what to expect during this time of learning, rest and renewal.

From a young age, both Shawne+ and Sheridan saw the power of prayer. Shawne+’s grandfather was a Baptist minister, and his parents were involved in the charismatic movement. His father became an Assemblies of God pastor, and as a young person he was well-acquainted with what he calls “extroverted expressions of prayer.”

Sheridan’s father was also a pastor, and her grandmother was an evangelist who experienced prayer’s power in both in her own life and in the lives of those for whom she prayed. “My parents … raised me to know God and to talk with Him,” she says.

Since those early years, God has expanded her understanding and experience of communion with Him. Sheridan shares, “Some years ago, I was on this spiritual journey with God, going deeper in His Word and experiencing Him more than I ever had. During that time, a friend encouraged me to go deeper in prayer and talk with God ‘until.’ … I immersed myself in prayer and several hours later I emerged with God having taken me to places in Him I hadn’t known. That was the start of a real understanding of prayer.”

These personal experiences and a knowledge of the power of prayer prompted Sheridan to join the prayer team at her church. “I wanted to be able to stand with others and pray with them for their needs.”

God has also deepened Shawne+’s perspective on prayer. As he studied art history, he gained an interest in the ancient church. “It was a huge step forward to discover some of the earlier rhythms of prayer.” …

[The prayer book] felt like home to me. The daily office became one of my regular practices,” he recalls. “The language of the prayer book gave me a language for my own personal prayers. … Praying for others has to spring out of that personal prayer practice. … So much is about listening.”

Before being ordained, Shawne+ and his wife led a Sunday school class and a small group for young adults. “Lifting up one another’s needs is what really drew us close,” he says, recalling the deep connections he built with group members through public prayer.

Now, as pastor of congregational care and associate executive pastor at Christ Church Nashville, one of Shawne+’s responsibilities is to see to oversee altar care teams and work with volunteer leaders. When asked what he now knows about prayer ministry that he wished he knew when he started, he shares, “There are no magic words. You don’t have to have the perfect language, you can speak in your own voice.”

In addition, Shawne+ explains that prayer is about learning who you are in God and further discovering your identity. And, it’s vital. “Prayer isn’t’ just ‘if we can get to it.’ It’s the center of our relationship with the Lord,” he says. “It’s this treasure.”

Sheridan adds, “It’s such a privilege to pray with someone. It isn’t so much about what I say or how I say it, but that I have come, taking God at His word to come to Him, and expecting Him to do what only He can do.” Some of the prayer times that have the most impact on her are those when people she knows from her work in the corporate world ask for prayer. She recalls a time when a leader requested prayer before a difficult meeting with a colleague. Later, he told Sheridan he felt God’s presence during the meeting, that it went extremely well and that he was grateful for the Lord’s care.

Shawne+ has also seen God intervene “clear as a bell” after praying with people in his congregation. He shares about a recent Sunday when a family came forward requesting prayer for a young man in trouble. Complicated systemic issues were preventing him from getting the help he needed, and Shawne+ joined the family to ask for God’s providential care. Following those prayers, the family saw amazing things happen in the courts, enabling steps that will help this young man get back on track. It was evident God’s hand was at work. “God allows us to join Him in what He does for others.” Shawne+ explains.

As he looks ahead to Winter Conference 2018, Shawne+ recalls a past conference when he experienced prayer’s power. He’d been experiencing anxiety attacks for the first time in his life and received a word from the Lord from those who prayed for him. He also experienced healing. “I felt a weight lifted,” he shares. “I received so much a few years ago. I’m looking forward to providing a place of care and renewal for clergy and anyone who attends [this year’s prayer training].”

Shawne+ says that those who participate in the training in January should expect simplicity, explaining that it will be peaceful, a time to listen and to be heard. “My heart is to create an environment that is very restful,” he says. But, he adds, there won’t be a lot of theory.

Sheridan confirms that though they will discuss how to effectively minister through prayer in participants’ churches, “Please don’t expect Shawne+ and I to come with step-by-step universal instructions for how to pray and/or how to build a prayer team. … Rather, expect us to come with hearts that are open to God and His ways, and a willingness to share our experiences and growth in our prayer lives and ministries.”

She adds, “Expect God to be faithful to who He is and how He operates. We don’t know what He will do, but we need to be open to however He decides to show Himself in the moment of prayer, and throughout our time together during the conference. And, expect to grow in your own relationship with God. He loves to do that when our spirits are open to Him. … And, expect to have a good time! We’re fun people.”

She encourages anyone who’s considering the training, “It’s for you! If you’re having doubts, come anyway. This is an opportunity to share in fellowship with one another, grow in God and in His service to others and experience His way. It’s an opportunity to grow in faith and trust, and in taking God at His word.”

She adds, “We pray because God wants us to talk with Him, to bring all of ourselves to Him and to trust Him. … God cares about every detail of everyone’s life and we will have this wonderful opportunity to partner with Him as He ministers in the lives before Him. What a privilege that is! Shawne+ and I are excited and grateful, and are anxious to see what God will teach all of us—before, during and after Winter Conference. I can only imagine how far-reaching our prayer times will be.”

Please register for the Prayer and Healing Ministry Team Training or to be part of the WC Prayer Team by January 10th.