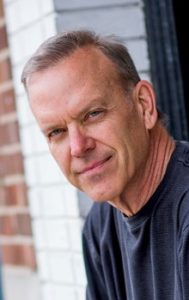 As an ordained pastor, speaker, coach, author and professor at Northern Seminary, Dr. David Fitch often talks about mission, the church, ecclesiology and the theology of God in the world. We are excited to host Dr. Fitch as one of our plenary speakers at Winter Conference 2018 and to gain unique insight into some of the principles from his book  Faithful Presence: Seven Disciplines That Shape the Church for Mission.

Dr. David Fitch believes church is a way of life, as he has experienced most of his life. A pastor’s kid, he grew up in the Christian Missionary Alliance, a small holiness denomination. “I got a good start in the Christian faith there,” he says.

After college, Dr. Fitch headed to seminary, but he didn’t stay for long. He recalls, “I was somewhat discouraged with the state of the church and just couldn’t imagine myself being a pastor, being that guy up there in the front of the church.” So, after a short stint in seminary, he moved to Florida to study international economics at the University of Miami. At the end of his first semester, he received devastating news: His father had been killed in a car accident.

Dr. Fitch moved back home to Chicago to be with his mother, and for the next six or seven years he worked in a financial services job. He looks back on that time as a period of shaping. “During those years I had an amazing time of re-evaluating and reconnecting to my faith. I like to say that I got saved for real for the second time.”

In search of real answers to his very real questions he turned again to seminary, this time enrolling in a Ph.D. program at Northwestern Seminary. Soon after, he got involved in church planting, and eventually left his Wall Street job to start a business, which in turn helped him establish churches. And, at age 43, he got married.

Now, as pastor, professor, coach and speaker, Dr. Fitch begins his days early, around 5:30 a.m., and spends the first three hours reading, writing, thinking and praying. On Mondays, he teaches and prepares lectures, and on Tuesdays and Wednesdays he works with about 45 doctoral students.

Ecclesiology, or the mission-shaped church, is among Dr. Fitch’s favorite subjects to cover in the classroom. “I talk about the changing cultural dynamics in the West,” he says, explaining that throughout the history of the church, many of the functions, practices and characteristics of the church have been shaped to operate in a Christian world. “But a lot of us are no longer in a ‘Christian-y’ world. How do we rethink what we are doing and be faithful to what God is calling us to do?”

Dr. Fitch also teaches several cultural classes at Northwestern, covering topics including sexual ethics and medical ethics, which he calls “a great mission field.” He also teaches on Christianity and pluralism. “I like to look at how we can engage other religions in a way that is not defensive,” Dr. Fitch shares.

In his next book, “Beyond Enemies,” he explores the church’s reconciling presence in the world. “I’m taking a look at how we’ve been shaped into an antagonistic community when we are called to make space and invite the world into the life of God,” says Dr. Fitch.

Community is a common theme in Dr. Fitch’s ministry and life. In addition to church on Sunday mornings, he’s part of a neighborhood gathering on Sunday evenings, a time of eating and praying together. And, on Wednesday evenings, he heads to a local bar to spend time with people in the area. “I think God has given me an evangelistic heart,” he says.

Through his ministry, Dr. Fitch has observed people who have learned to shape and cultivate the church as a way of life. “People see how the church is not a set of programs. It’s not even a Sunday morning gathering. It’s a way of life that must be cultivated by its leaders. To do that well, there are some things we have to give up. We are so intent on controlling everything.” He’s also seen people discover how sacramentalism can be a bridge to missions in the world, and a means to disciple Christians.

Dr. Fitch admits he can be a disruptive figure. “I’m trying to disrupt people’s frames of seeing things so they don’t get locked into the terms of the world,” he explains. “We’re told, for example, that we either have to be non-affirming or affirming. Anything else and you are not working for the justice of the world. To that I say, ‘You’re right! I’m working for the justice of the Kingdom.’ We have to make space for what God wants to do to reconcile the world to Himself.”

As he prepares to speak at Winter Conference, Dr. Fitch asks, “What does it mean to be Anglican and missional? How can we rethink what it means to be an Anglican church given the cultural challenges of our day?”

He also raises the question, “How do you engage an angry world? Liturgy on Sunday morning is important but it’s not enough. This is the mission field that we have been given. How will we respond?

Be sure to join us for Winter Conference 2018! Register now.