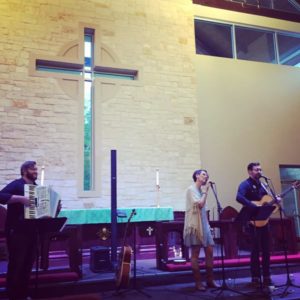 Liturgical Folk performs in Tyler, TX during their Pentecost tour

“Almighty God, Father of all mercies. Here we your unworthy servants give you humble thanks…”

So begins the prayer of General Thanksgiving found in the Book of Common Prayer (BCP). So also begins track seven on Liturgical Folk’s album “Table Settings,” a project which set many of the BCP’s most beloved prayers to music.

This November, the General Thanksgiving will be sung live in Longview, TX, Franklin, TN, La Porte, IN, and Holland, MI, as the members of Liturgical Folk go on their Thanksgiving Tour.

We recently sat down with Ryan Flanigan to learn more about the Thanksgiving Tour and what to expect at a Liturgical Folk concert.

For those who aren’t familiar, what is Liturgical Folk?

Liturgical Folk is the sound in the bones of a local community. It is a music project of the Anglican Mission in America.

Liturgical Folk is also people, all of us, in that we are all creatures of worship and desire.

The music we make is a reimagining of the hymnal for a new generation of worship. Our mission is to make beautiful and believable sacred music for the sake of the world. Music that is suitable for all ages and faith stages.

What can someone expect at a Liturgical Folk concert?

Our concerts are a lights-on, words-in-hand, public liturgy for everyone. The music is just as the title describes: liturgical folk music.

During the concert my wife Melissa and I, along with Tiffany and Justin Brooks and Father Nelson Koscheski, will tell stories, read poems, and perform songs

Our concerts are interactive. We encourage everyone to participate, whether they are singing with us or reflecting on the words.

One of my favorite times in each concert is a time of questions and answers. In each community, different questions and issues arise from the practical aspects of songwriting to the philosophical meaning behind certain hymns. We love being able to encourage and speak to people where they are.

Why do a Thanksgiving Tour?

The way we craft our tours is pretty practical, revolving around our life and travel plans. My family lives in Chicago, and we knew we were heading up there for Thanksgiving, and figured we could make some stops along the way.

The anchor of the tour is our concert at St. Paul’s Episcopal Church in La Porte, IN. When we put out feelers for our first tour a few months ago, they expressed interest in having us come and perform. We have quite a few connections there, with Father Paul Nesta at St. Paul’s and Jennie Riddle of People and Songs. People and Songs is a community of creatives that uses music to strengthen the church. There are a lot of great eccummenical things going on in La Porte, and that is at the heart of what we are doing, so it is a great fit.

Once we had that time and place set up, the other locations fell into place, too.

Where will you be going?

La porte, IN on November 19

You did your first tour this summer. What was most rewarding or meaningful for you?

The most rewarding thing about each concert was seeing people’s facial expressions. At the beginning of each concert, the average expression was of curiosity. You could see that people were there because someone they trusted had invited them, but that they didn’t know quite what they were walking into.

By the middle of the concert, the expressions of curiosity had turned to delight. We heard many people express the surprise of what they were participating in.

By the end, many expressed excitement over what we were doing. If I had to put my finger on it, I think they were excited about a different expression of church music than what they were used to, especially if their norm is contemporary church music. Even our friends in more high church settings were excited about the folk element of what we were doing.

When and where will your next tour be?

As of right now, we don’t have anything officially planned. We think something might shape up for the Spring that would take us to the Southeast.  We would also love to do something out West, maybe next summer.

Do you have plans to record more Liturgical Folk albums?

We do! We hope to record Volumes 3 and 4 of Liturgical folk next summer or fall.

How can people keep up with what Liturgical Folk is doing?