Waiting on the Lord: My Ordination Experience 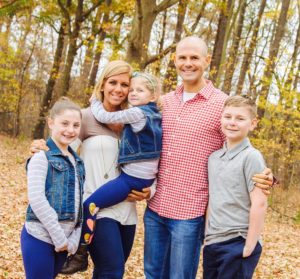 “We reviewed your application, and you’re worthless.”

It was 2010 and Jim Bridgham was on the phone with a recruiter for an Active Duty Air Force Chaplaincy position, his dream job. “You’re worthless,” the recruiter repeated. This was the second year the Bridgham had applied for the position. A few years later, he applied one more time only to be told that due to an administrative error, he was no longer eligible. His dream job was now completely out of reach.

Bridgham first felt the call to ministry in 2000. His journey since then has been characterized by seasons of waiting and by faithful service in the midst of disappointment.

In 2016, Bridgham received an unexpected phone call inviting him to apply once more to the Air Force Chaplaincy, leaving the Air National Guard Chaplaincy for a position with an active duty Wing. A few months later, he was accepted, and within two weeks he and his family moved to Virginia to serve.

At Winter Conference, Bridgham was ordained to the Diaconate, fulfilling another long-held dream. We recently sat down with Bridgham to hear his story

Tell us about yourself. What is your faith background?

I grew up in a small suburb of Boston. My parents were good, hardworking people. I spent a lot of time with my grandfather, who was a retired Navy Chief Petty Officer and who mentored me, and watched me when my parents worked.

I didn’t have a strong faith growing up. In High School, a world religions class inspired a Universalist faith, which is what I believed into my college years. I was a good kid, very straight edged.

During my first year of college two important things happened. First, I started dating my (now) wife and, second, we started attending Navigators, a Christian collegiate ministry. My wife and I both came to Christ and were mentored by some wonderful people.

We started attending an Episcopal Church across the street because our mentors told us to go to a church, and that was the closest one. During that time we fell more in love with God and in love with the liturgy.

When did you first start pursuing ordination and Air Force Chaplaincy?

I first started pursuing ordination in 2000-2001, but encountered some delays. The Anglican Mission was brand new and I was about to go into active duty with the Air Force. I pursued ministry as part of a chaplaincy organization, the International Ministerial Fellowship, while I served as an intelligence officer.

In 2006, I attended seminary in Denver. I received my Master’s of Divinity with an emphasis on leadership and was mentored by a Denver SWAT team Chaplain as part of a local congregation. All the while I employed the Book of Common Prayer and continued self-study, working through a list of books recommended to me by Canon (now Bishop) Kevin Donlon.

At the end of that time in seminary, I had completed my Masters of Divinity, and was commissioned into the Air National Guard as a Chaplain. I applied for an active duty chaplaincy position, my dream job, in 2009 and was not accepted. At the time, the Air Force was the most selective military chaplaincy, accepting only a few applicants a year. If you weren’t the absolute best, you simply didn’t make the cut.

I applied to active duty again a year later. I had been working as a federal civilian in the Government alongside my position as a traditional (part-time) Air National Guard Chaplain.

The recruiter called me and said “we’ve reviewed your package and you’re worthless.”

He told me maybe I should get a PhD and then consider reapplying. I was heartbroken.

In 2013, I decided to apply one more time. They told me I was selected! And then, one day, while chaperoning a school museum tour, I received another terrible phone call. They apologetically informed me that they made a mistake. Due to an administrative error related to my date of rank, I could not be brought on as an active duty Chaplain. I was no longer eligible, and my dream was dead.

I was heartbroken, but kept following the Lord the best I knew how. I went into Children’s Ministry at our local base chapel and life went on.

Three years later, in the Spring of 2016, I received an out-of-the-blue phone call. It was another recruiter, this time inviting me to apply to be an active duty Air Force Chaplain. It turns out that someone I had interacted with had put in a good word for me. I applied and was accepted! Sixteen years after first sensing a call to ministry, I now have my dream job.

During that time you were also pursuing ordination. What was that process like for you? 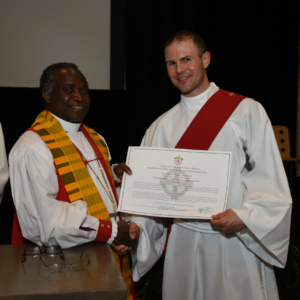 In February of 2016, I met with Bishop Gerry Schnackenberg. I was leading and supporting chapel ministries at the time, but felt called to serve in the Anglican tradition. In my heart I continued to feel a call to the priesthood, and felt like I wasn’t yet where I was supposed to be.

Around that time I was also fortunate to be able to get coffee with Bishop Sospeter T. Ndenza. He affirmed a sense of calling on my life. I went into a period of discernment as I continued to serve in Longmont, CO. When it was time to formally begin the ordination process, Epiphany Anglican Fellowship allowed me to work through them.

The ordination process was very meaningful to me. There was a lot of study and reflection and a lot of time pursuing how to apply knowledge as wisdom.

What’s next for you?

For now, I continue to serve as an Active Duty Air Force Chaplain with the 363 Intelligence, Surveillance and Reconnaissance Wing on Joint Base Langley-Eustis. I work with amazing Airmen supporting challenging missions all around the world. I plan on being here as long as they’ll let me stay! Further, I am delivering an Air Force podcast, called The Pillars. In conjunction with my co-host, Dr. Walker, we teach practical resilience skills that can be applied in the day-to-day lives of Airmen.

In the future, I think the Lord may be calling my family and me to church planting in the Denver, CO area.

What advice do you have for someone who is in a season of waiting or disappointment?

In seasons of waiting and disappointment, it’s important to recognize that God is preparing a way for you to live out your calling. I went through times actively wondering why we went to Seminary. My day-to-day job was certainly not ministry, and seminary was a challenging experience for me. I found that God really was preparing me for this specific ministry over the last 11 years. The experiences I had, the opportunities I pursued prepared me for this Wing. I would encourage my Brothers and Sisters in the Mission to stay true to your calling and trust God to bring you through.