Coffee with a Friend: Caleb Miller 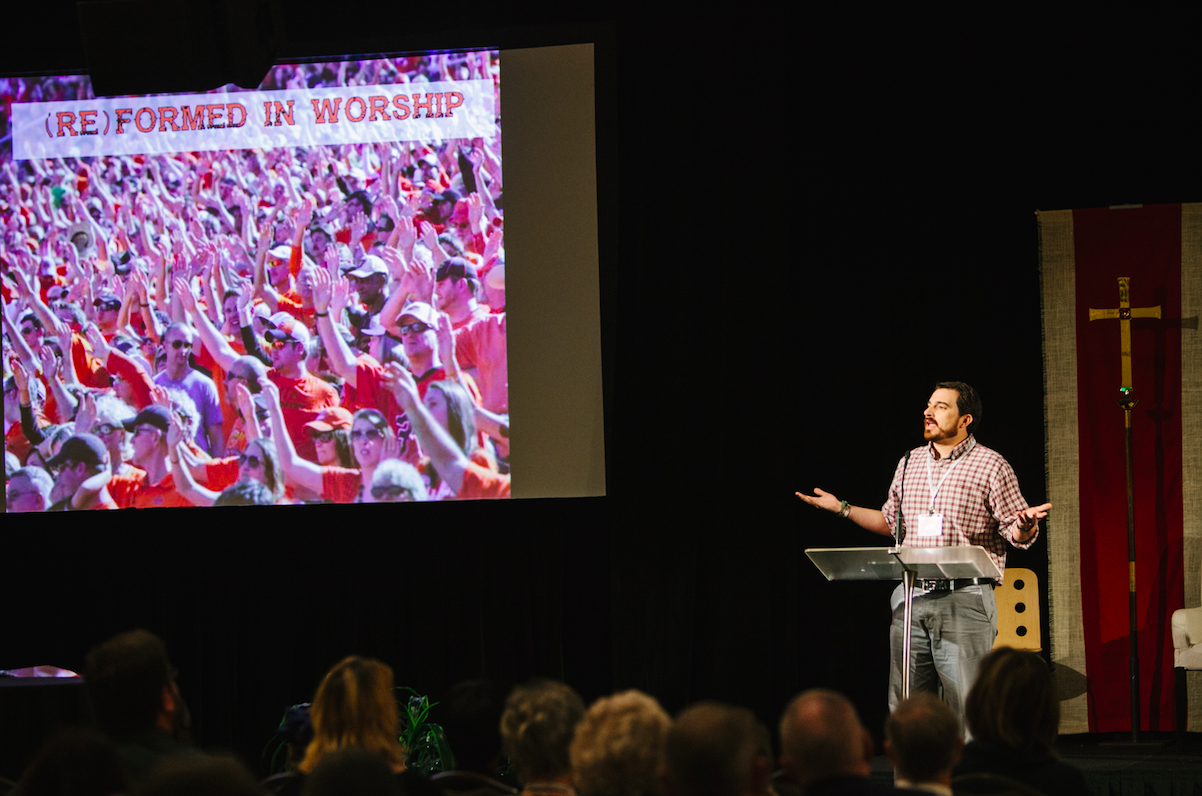 Father Caleb Miller delivers a mini-talk on Liturgy at Winter Conference 2017. To view his talk, visit our YouTube page.

The first time Caleb Miller and his wife visited an Anglican church together, Caleb told her: ” the people will be nice, we’ll get to take communion, and the sermon will probably be terrible.” Thankfully, he recounts, he was right about the people and communion, and wrong about the sermon.

Caleb went on to be ordained to the priesthood in 2010 and has been the Rector of Immanuel Anglican Church in Destin, FL since 2015. We recently sat down with Fr. Caleb for our ongoing series, “Coffee with a friend,” to learn more about what his day-to-day looks like and what the Lord is doing in his life.

Tell us a little about yourself.

I grew up in Kansas in a Baptist home. I didn’t really live out my faith in high school and it wasn’t until one of my senior years of college that I came to a realization of my need for God. One of the reasons the Parable of the Prodigal Son is so powerful for me is that I, like so many people, can relate to the son, who makes up his mind on how he is going to come back to the Father, and when he does come back all he can do is say “Father, I have sinned against heaven and against you. I am no longer worthy to be called your son.”  We often wander off away from God, only to find Him awaiting our return, our repentance, and offering grace, forgiveness, and mercy.

I went to seminary at Gordon-Conwell thinking I would become a Baptist pastor. I graduated with no job, however, and moved back to Kansas. I was living with my grandmother, working construction, and volunteering at our church.

I got the opportunity to do mission work in Kodiak, Alaska, and since I was not married and had no job, I signed on to serve in ministry there. During my first week on the job, I met Anna, who would become my wife. She was there with her church on a mission trip. We stayed in touch and soon after I left Alaska, we got engaged, and accepted a position as a Baptist pastor in Pennsylvania.

A year later we moved to California, where Anna is from. I got a job teaching Bible in a Christian High School and for six months we visited various churches, trying to find a new church home.

One day we decided to visit an Episcopal church six blocks from our house. I had a few Episcopal friends in seminary, and I remember telling my wife: “The people will be nice, we’ll get to take communion, and the sermon will probably be terrible.”

Thankfully, I was right about the people and communion, and was wrong about the sermon.

When did you start serving at Immanuel Anglican Church?

I started serving as an Associate Pastor at Immanuel in February 2014 under Father Mike Hesse. The next year, Fr Mike announced that he was going to retire. Fr. Mike served at Immanuel for 24 years, and I was blessed to serve under and learn from his leadership for a full year before he retired.

What gets you up in the morning/motivates and energizes you?

The farm ethic that I was raised with said: you get up in the morning to work. That’s what you do. Even now, as a priest, I get to do what I do because other people trust me with their time and money. Part of being a pastor is being a good steward of that.

I love to preach and teach and to see people “get it.” We as Priests and as Christians have the responsibility to, just as the woman at the well in John 4 did, tell people “come and see this guy.”

It’s all about Jesus. It’s not about what I can offer. I get to make Jesus known through preaching the gospel, celebrating communion, leading chapel for our preschool, praying for the sick, saying Morning Prayer, and on and on.

What is your daily devotional rhythm, or what does your own spiritual formation look like on a daily basis?

For the last couple of years I’ve tried to read through the entire Bible in a year. Jeremiah and Job always kill me. For whatever reason the Bible plan I had last year had me reading them at the same time! But I kept going and finished! I am daily reading God’s word.

My prayer life is a work in progress. Just as Brother Lawrence did, I try to pray throughout my day. But I struggle at times to find that 10-15 minutes of time to be alone with the Lord.

I love praying the Morning Prayer Service from the Book of Common Prayer. I love the collects, and have found that the liturgy helps me get myself out of the way and gives me more freedom to pray.

What is the most encouraging or memorable thing that happened in your life and ministry in the last year?

A couple of things come to mind. Our church has gone through a change of leadership and even though I’ve now been rector for almost two years, Father Mike was here for 24 years, so we are still in a period of transition. I have been really blessed by the way the church has walked through this season. I have been overwhelmed by the support I’ve received from the church and am especially grateful to the staff, vestry, and a group of six elders who I meet weekly with.

I also really love baptizing people. In the last year I got to baptize a guy in his mid-20s, a guy in his mid-60s, and babies. The two most political acts we do as a church are to celebrate the Eucharist and Baptize people, because in doing so we are declaring that Jesus is Lord.

What person has most impacted your life and why?

With the caveat that Jesus has changed my life the most, I can’t go too far without saying my wife, Anna. She is the mother of our children and maker of our home. She is gentle, patient, and kind. She’s raising three kids (I’m the third). She understands the rhythms of ministry and why I may get a call at 5:30PM that means I’m not going to make it home for dinner. Anna, like many clergy spouses, does things for which she will not receive praise and commendation, and I know that I do not thank her enough.

I have also been blessed by the many people I have served under and with. Bishop Sandy and Michael McClenaghan, Ron Browning, and Mike Hesse, the rectors I have had the privilege to minister with over the years, have mentored me and taught me so much.

What is something that you would like to accomplish in the future?

At the end of the day, I want to be the priest of the church that is what God wants us to be. I want to see us grow in discipleship and maybe be a parent church to a church plant someday. I often tell people, I love Immanuel Anglican Church’s past, present, and future.  I’m excited to see what the Lord has in store for us!