More Than An Envelope: My Ordination Experience

Drew Witt, lead pastor of the Gathering Midtown in San Antonio, TX, was ordained to the diaconate last month at Winter Conference. Following, Drew shares his ordination experience, and what it meant to receive more than an envelope. 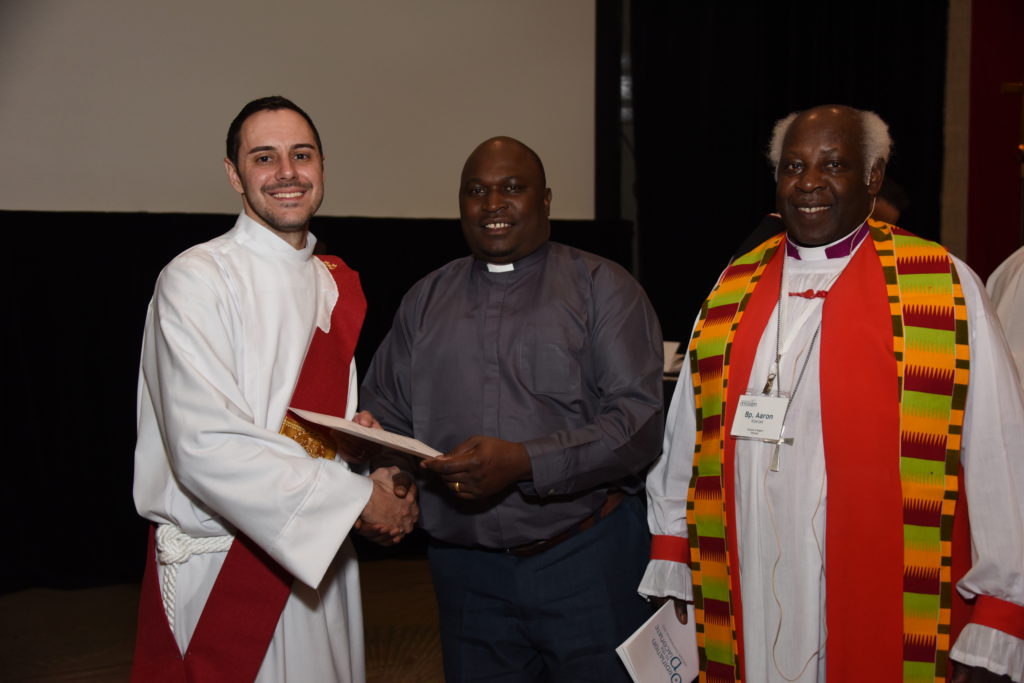 I grew up in a well-known charismatic denomination. They valued “loose structures” and “following the Spirit’ very heavily. In many ways, I’m grateful for that. However, despite their benevolent intentions, loose structures aren’t always helpful. Sometimes they can be hurtful. I loved that there was little red tape and hoops to jump through. It’s helpful when doing evangelism and incarnational ministry. But in the formation and ordination of ministers, I’m not so sure.

In my early 2000s, I chose to take the residency/distance education route instead of four years at a “boring” seminary. For three years I was a self-funded missional resident, gained a lot of first-hand ministry experience, read countless books, took thirteen tests, endured a final exam, and topped it off with a nerve-racking interview in front of a board of suits. I passed! I was now a Reverend who could marry and bury.

When I received my ministry certificate, I received it by mail. In an envelope. There it was, a certificate with a gold seal, accompanied by a letter that said, “Welcome to the Fellowship! Now about your tithe to the District…”

No ceremony. No prayer. No laying on of hands. Just a stiff manilla envelope and message about giving to the District.

After eighteen months of working in a very unhealthy church that was struggling, I felt God’s call to move on and take a time of rest. I needed to reevaluate if I really felt called into the ministry. Of all places, I found rest at “the big bad baptist church” on the other side of town. As a Pentecostal, I was told to never go to a church like that. They believed in “once saved always saved” (gasp!).

Those people were lovely. After being there for a season, God clearly called my wife and I to join a friend in planting a church in San Antonio. That was 2007. We resigned our jobs, packed our apartment, and planned on moving seven hours away from everything we’d known for twenty plus years.

The night before we moved, I stayed up in my office and cried until 3:00 a.m. The reality of going without a blessing was setting in. I was sad because the church I grew up in, and the church that credentialed me, now in shambles, wasn’t sending me. On a deep level, I understood that a piece of paper in an envelope is nice, but the laying on of hands and sending off in peace is better. As I re-entered ministry in the form of church planting, I longed for ordination but never received it.

We were youthful and ignorant, but God’s hand was on us and that church plant in San Antonio took off and is doing well ten years later. Four years into the plant, they sent me out to plant another church in downtown San Antonio for all the hipsters. After several years doing that, despite fruitful success, I still felt empty and isolated.

Then I fell into the company of some Anglicans from The Mission. Despite not understanding the smells and bells, I discovered that my theology and practice lines more up with The Anglican Mission than the denomination I spent 32 years in. I knew that for my health and the health of our church, I needed to be aligned with a different fellowship and have a real spiritual authority in my life. God made it clear to many people that He was calling me to be a follower of Jesus who fished from an Anglican boat.

Truthfully, I was delighted. That is until I learned I’d have to go through a testing and ordination process again. Did I really need to read all these books again? The interviews? The psychological evaluation? The test? THE TEST! Come on!

To be frank, I dreaded being ordained. I would ask, “doesn’t my fruit speak for itself? I’ve planted two healthy churches and have multiplied disciples countless times? Am I not already ordained in the Spirit?” At the end of the day, I wanted a transfer, but what I needed was an ordination.

The Lord taught me a few things during this time. First, there is a difference between a Certificate and an Ordination. I never received what I longed for, and it was worth going through the process. It took me a while to realize there was more than an envelope on the other side.

Second, the Lord taught me that it’s not about me. My main concerns about going through the ordination process were related to time and capacity. The worst thing to ask an evangelistic church planter to do is spend a lot of time in books to prepare for a test given by people who are already Christian! The harvest is plentiful! There’s work to be done! Shouldn’t the 39 Articles be read and discussed another time?

In time, I came to learn that the beauty of ordination is that it invites others into the story that God is writing. When I humbled myself and submitted to the process, I saw that it was more about people and my development. Things began to change, including me.

Ordination allowed other people to recognize God’s hand on my life. But it’s deeper than recognition. Ordination allowed them to put their hands on my life alongside God’s hand. Not only was it affirming to hear them say, “yes you’re called”, but it was a greater affirmation to learn and love these men and women who invited me to join my heart with theirs, as we all love and serve God and His kids.

Without the process, I would have missed the people along the way – Aaron, Allen, Brit, Bryan, Caroline, Chad, Claudia, Don, Gavin, Ken, Kevin, Lucy, Matt, Mike, Philip, Robert, Ryan, Sandy, Seth, Vithalis – you get the idea. 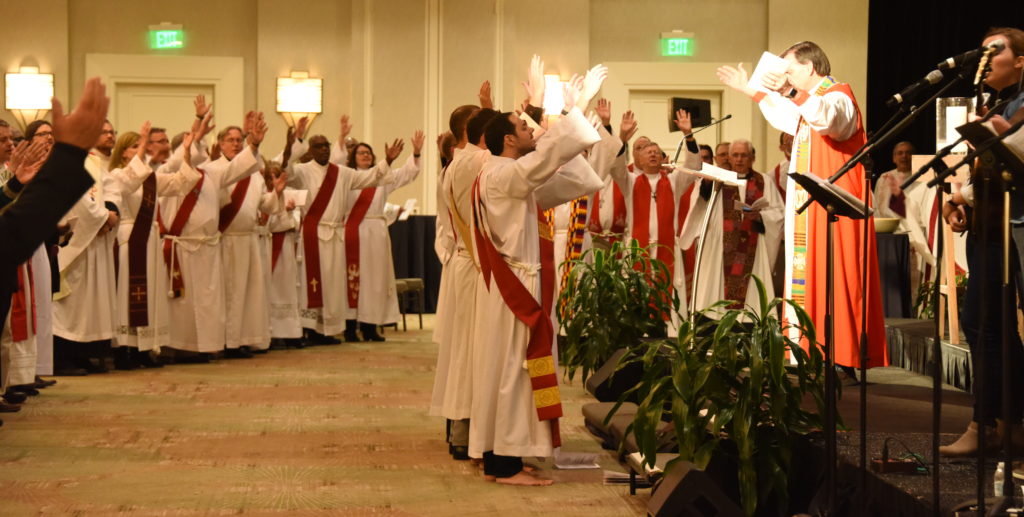 As the Ordination Ceremony was nearing, my greatest fear was that I wouldn’t feel anything and that it would be just choreography and pageantry. I’m not a feeler, yet I wanted to feel the ordination. I’ve learned that when I cry, something drastic has happened. Like leaving my hometown without a blessing. I deeply desired something to happen beyond a piece of paper.

I received the liturgy for that evening well in advance and read through my parts so I’d be prepared. But I didn’t read what the parts were for others. That led to many surprises throughout the ceremony. The biggest one being a Scripture reading from someone unexpected.

Early in the ceremony, David Hrncir got up to read from Jeremiah. David is my allergist and has helped me overcome my allergies to mold and mountain cedar. He diligently cares for my health in a way no one else has, and I love him deeply. I didn’t know he was going to be there and was surprised to see him at the lectern.

Then he started reading.

“Now the word of the Lord came to me, saying, ‘Before I formed you in the womb I knew you, and before you were born I consecrated you; I appointed you a phrophet to the nations.’ Then I said, ‘Ah, Lord God! Behold, I do not know how to speak, for I am only a youth’; But the Lord said to me, ‘Do not say, “I am only a youth”; for to all to whom I send you, you shall go, and whatever I command you, you shall speak. Do not be afraid of them, for I am with you to deliver you, declares the Lord.’ Then the Lord put out his hand and touched my mouth. And the Lord said to me, ‘Behold, I have put my words in your mouth'” Jeremiah 1:4-9

He read the exact passage in Jeremiah that God used to call me to San Antonio the week I cried in my office until 3:00 a.m. Had I fully read the liturgy, I would have seen it coming. Thank God I didn’t.

Cue the tears. In that moment, I knew that God knew.

Ordination was happening. God was answering the desire I had at 3:00 a.m. ten years ago.

He was grafting me into the Biblical office of a deacon, affirming my belonging in a Christ-centered community, and anointing me with the Holy Spirit. I was being set free and empowered for Gospel ministry in a way I have always needed.

He was giving me more than an envelope.