In June 2016, we profiled Ryan Flanigan, the worship leader at All Saints Dallas, and his desire to cultivate songwriting through retreats (you can find that post here). Ryan, though, in addition to all that, has found the time and the musical partner to set him on yet another pursuit: Liturgical Folk.

Both being from Texas, the music certainly takes on elements of these roots, though influences come from African-American spiritual songs to joyful carols to deep lamentation. According to a recent article in the Dallas Morning News, “the collaboration of Flanigan, 37, and Koscheski, 75, is also a unique cross-generational pairing of two men united by a belief that when music is honest and refined it can be a credible, positive witness for the church.”

On February 1, both “Table Settings” and “Edenland” will debut. To find out more about the project, visit their website, and to read the article in The Dallas Morning News profiling Flanigan and Koscheski, click here. Ryan will also be leading worship at our annual Winter Conference. 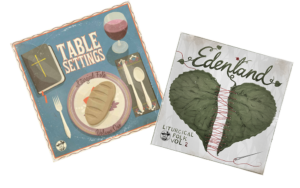