Of Pubs and Theology

The Dallas Observer this week posted a lengthy story about beer and theology–Bible studies and fellowship happening around town with increasing regularity in pubs. To read their story, click here.

Though surprising to many, gathering in pubs around town has become a consistent part of ministry for churches like All Saints Dallas. This summer, the theme of “Beer and Theology” has been spiritual formation led by Skip Ryan. A former pastor himself, “Ryan’s struggles with addiction and relapse are a matter of very public record. Listening to someone in recovery give a talk in a bar was intense, but that backstory lent his message that evening — how to live a life of “heroic weakness” — some authority.” Impactful discussions like this are certainly intentional, and other pastors mused that “for the first time, my neighbor will go with me to an event.” 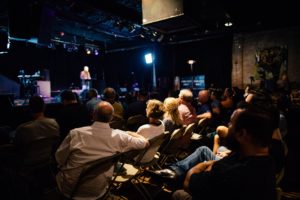 Rev. Chris Myers–pastor at All Saint’s East–spoke as to why events such as “Beer and Theology” are becoming more common in a city like Dallas, Texas: “In Dallas, it’s hard to find somebody who hasn’t had an experience of Christianity — so you have a lot of what we call ‘over-churched’ people that think they know exactly what Christianity is because they’ve had certain experiences of it.” He said, “We want to reframe that and help the over-churched sort of detox and help the under-churched have an experience that’s not a caricature of the faith.”

Though these events deal directly with pubs and beer, the writer sees a broader implication of what’s going on: “This reflects a shift in the way American Christians interact with popular culture, moving toward engagement rather than withdrawal.”

[It is] part of what it means to be human — to take this stuff around us and make something new,” said Myers, summarizing. “I think of theology in that same way. We’re given the world and the time and the place that we live in, and we have to take all of that and put it together and make it into something else that helps people understand who they are and what matters.”
AMIA Communications2019-07-04T00:58:53-06:00August 11th, 2016|Church Life|Comments Off on Of Pubs and Theology