“Every movement actually moves on sound waves, and the modern liturgical renewal is no different.”

In a 24-hour period from June 17-18, Ryan Flanigan—the worship leader at All Saints Dallas—hosted 20 songwriters from Florida, Alabama, Arkansas, and Texas in Dallas for a songwriters retreat. There were no speakers, no lectures on how to write songs; they simply gathered and created together. 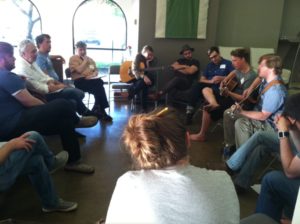 “Worship leadership in the church looks very different now than it did twenty or twenty-five years ago,” Ryan said. “We want to create songs that are accessible for the modern worship leader.” To this end, 20 men and women wrote 20 songs, the majority being co-writes. Attendees came from churches within the Anglican Mission, ACNA, and the Episcopal Church, all writing songs together.

This worked because there were no egos, according to Ryan. This led not only to great fellowship but that “we actually created stuff. Stuff that did not exist without us getting together for those 24 hours. Beautiful stuff. We wrote 20 songs that didn’t exist before. We already sang one at All Saints.”

The retreat was formed by United Adoration (UA), a group of worship leaders and songwriters aimed at creating fresh songs for the liturgical church. When asked why songwriting retreats like this are needed, Ryan quoted Martin Luther: “To gather with God’s people in united adoration of the Father is as necessary to the Christian life as prayer.” Ryan has been working with UA for the last two years, and this was the second regional retreat he has hosted in Dallas. In addition to their national gathering in Chicago, UA is working to expand these retreats across cultures, hosting on in Spanish in San Diego later this summer and hoping to move internationally in the future.