As the son of a pastor in the Anglican Church, I knew three things:

I guess this is why we should never say never to God.

By 2009, my time in university had drained me of life. That summer, my dad brought me with him to visit John Stott, and in his old age, Uncle John spoke great wisdom to me:

As I returned home to Vancouver, Canada, with these words, I wrestled with God. I did not want to submit. In that period of wrestling, God issued me a challenge: to pray for three signs to confirm my calling to pastoral ministry. It truly seemed like God was issuing this challenge to me, so I prayed.

The next week, a relative whom I had not seen for several years visited our home, and her first words were, “Ignatius, you’re almost finished university! What’s next? You should go to seminary because we need young and passionate pastors like you!” I was stunned. I had prayed, but I didn’t actually expect God to move.

The next week, it happened again.

Our family flew to L.A. for the consecration of my dad, Silas Ng, as bishop. Rick Warren was invited to speak there, and he shared that he was a fourth generation pastor. Hearing this, I was cut to the heart. For so long, my pride told me to find an identity apart from my father.

The week after, God moved a third time.

In the installation service of my dad as bishop, many clergy from around the world visited us. One pastor came to me after the service and spoke these words:

“You’re Bishop Silas’ son, right? I don’t know you but I feel called by God to tell you that if he has called you to do something, you need to go and do it. I know how you feel because I’m also a bishop’s son and I know people look at you differently. But don’t worry, do what God has called you to do!” 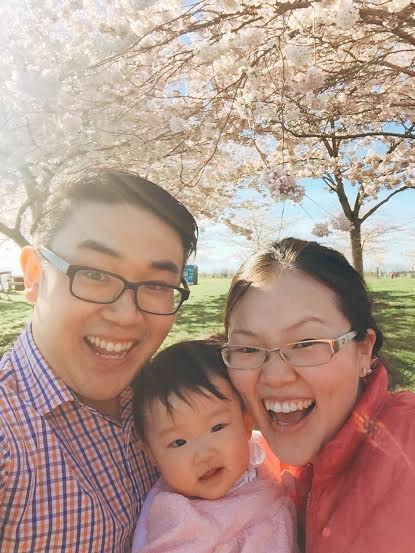 I was stunned. Stunned because God had been so faithful towards me of such little faith. Between that time in 2009 to now, I studied towards an MDiv. at Regent College. God allowed me to meet my wife Anna, and, shortly after graduation, we were married in September 2014. I began to serve in the role of Family Pastor at Richmond Emmanuel Church in beautiful British Columbia in Canada. Six months ago we welcomed our daughter Zoe Glory into God’s world.

Rev. David Larlee said at my ordination, “Ignatius, I would like to bless you with the stole that belonged to my grandfather Rev. Alvin Hawkes. On this stole is the word ‘dominion.’ Canada was founded to be a dominion of God, from sea to sea, and from the rivers unto the ends of the earth, according to Psalm 72:8. We lament the fact that Canada is no longer a dominion of God but let us work together for God’s kingdom so that it may be his dominion again.” I could not hold back my tears. My story is one of running away from God’s call for me to participate in his ministry from generation to generation. As I disciple young Christians from immigrant families, I see God’s call to his redemptive mission to the generations. As Rev. Larlee, a Canadian, gifted me, a Chinese-Canadian, his grandfather’s stole, it was God’s sign for me that his mission extends across cultures.

And this for me is why I am most excited to be ordained into the Anglican Mission, a society that participates in God’s mission in every cultural context possible to proclaim the good news that Jesus Christ is Lord and make disciples who live in light of his kingdom. The Anglican Mission is rooted in the faith of the church from generations ago, and we seek to express that in ways that both relate to and challenge our cultural contexts.