Coffee with a Friend: Cindy Miller 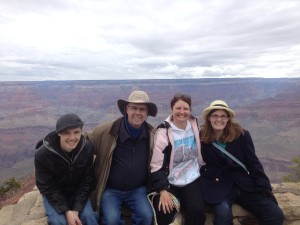 Deacon Miller and her family at the Grand Canyon

This month, we sat down for coffee and a chat with Deacon Cindy Miller of Christ the King Anglican Church (CTK) in San Jose. Miller is married to Brian, has two teenagers, and has been a member of CTK since 1992. Miller faithfully served the church in various volunteer roles until 2013, when after a miraculous healing she pursued ordination and went on staff. Pull up a chair to hear the incredible work the Lord has done in Miller’s life.

Tell us about yourself.

I was born and raised in California, in a small mountain town. I grew up in the Episcopal Church, and though I always believed in God, it was really in High School that I began to realize there was more to being a Christian than just going to church on Sunday mornings.

I became a part of a youth movement called “Happening,” and it was during this time that I first heard a call to the ordained ministry. At the time the church was not accepting women candidates, so I just let the call sit there. Growing up I also wanted to be a nurse, and so that is what I pursued in college. I worked as an RN for many years, got married, and stopped working for a while when I had my kids.

In 1991, I started attending Our Savior Episcopal Church, which became Christ the King Church in South Bay in 1994 when we left the Episcopal Church. We weren’t under anyone for a number of years, and in 2000 we were one of the first churches to come into AMIA.

In 2001, six months after I had my second child, I started experiencing the first symptoms of what took two years to diagnose as lupus. Most of the time I was able to keep things stable and under control. I went back to school to get a Nursing Education degree so that I could teach, as that would be easier on my health.

Over the years, my sickness got worse. I was initially diagnosed with systemic lupus, and later was additional diagnosed with myasthenia gravis, a neurological disorder. This affected my arms and my legs, and made it difficult to move around, walk, and function.

Eventually I stopped working, though I tried stay active as much as I could. I got an electric scooter so that I could have mobility. I was still serving at church in whatever ways I could, for example, serving as the church treasurer.

When did things change?

At the end of 2011, Father Mark Lauer (our senior pastor), two lay leaders and I joined a leadership community with 3DM, an interdenominational organization that encourages and equips churches for discipleship and mission.

The learning community met four times a year over a two year period. Each meeting was essentially a week-long conference with intensive training. Between meetings, our team would meet weekly at the church. The big takeaway for me was learning about God’s power and authority.

At the very last meeting, things got really bad for me physically. I could no longer feel my left leg and left arm, which my doctors had told me could happen. A group of people came around me to pray. Up until that point, I had given up on believing that God could heal me. But as they prayed for me I felt something change. There was no pain anymore and there was a strength that was not there before.

That was three years ago.  Before that day, I was on a half dozen medications to manage my two illnesses, and now I am off all but one. I walk three to four miles every day, and am able to do things that I forgot I couldn’t do before! Even my sense of taste has come back, a symptom the doctors couldn’t explain.

Six months after my healing, I began asking the Lord: “Now what? You’ve given me a second chance. I get to do something physically for you, I can be active again. What is it you have for me?”

I felt the Lord telling me it was time to be ordained. That was the call. A year later I was ordained as a Deacon and went on staff.

What gets you up in the morning (energizes/motivates you)?

There are a couple of ways I can answer this. The first is I go on a walk every morning for three to four miles. Whenever I exercise I am reminded of what God has done for me and what He can do!

The second way to answer is that I wake up with positive wonder, asking God “what do you have in store for me today? Who are you going to bring in my life for me or me for them?” I was homebound for so long, I love getting to be around people.

What is your daily devotional rhythm, or what does your own spiritual formation look like on a daily basis?

On a daily basis, I pray the daily office and read through the lectionary. I am constantly in different parts of the word. I use the parts that stick out to me to reflect on what God has for me for that day and what areas He wants me to grow in.

What is the most encouraging or memorable thing that happened in your life and ministry in the last year?

In the past year I began a women’s Bible study. When we started no one knew each other but everyone was committed to coming every other week to study the book of Acts, looking in particular at what the Holy Spirit can do. I’ve seen this group of women take in the scriptures and be vulnerable to pray in new ways. Together we have seen the Lord move in sometimes expected and sometimes unpredictable ways!

One of the women who attends came into our church a year and a half ago through an Alpha course. She was ready to renew her faith in God, and it has been incredible to watch her grow. She is now talking to her boss about changing her work schedule so she can be more involved at our church, her new community. It is a story of transformation!

What person has most impacted your life, and why?

I’ve had so many mentors over the years, and it’s hard to pick just one. But in terms of impact, I have to bring it back to two people who kept encouraging me to believe that God could heal me.

The first person is Father Mark Lauer, our senior pastor. On a regular basis he would remind me that God was able to heal me, that it was possible. His encouragement included allowing me to be as active as I wanted or could be in ministry. I believe this all laid the groundwork and prepared me for my physical healing, during a time when I had given up on seeking healing.

The second person is one of the participants of 3DM named Sean. The first time I met him, he said “I want to pray for you because God wants to heal you.” Two years later, on the last day of the 3DM training, the day I was healed, Sean was there, too. I remember him telling me earlier that day “let’s pray before you leave.”

What is something that you would like to accomplish in the future?

In the future, I’d love to be a part of overseas missions. It’s something that has been on my heart for a very long time. I’ve always felt restricted, that I couldn’t do it, but that feeling has been lifted. It could be a combination of a spiritual and medical mission trip. I have this medical background for a reason!