Ryan Flanigan, Minister of Worship Arts at All Saints Dallas, will be leading worship at Winter Conference 2016. In this post, Flanigan shares his vision for worship as well as how he found his way into the Anglican Mission. 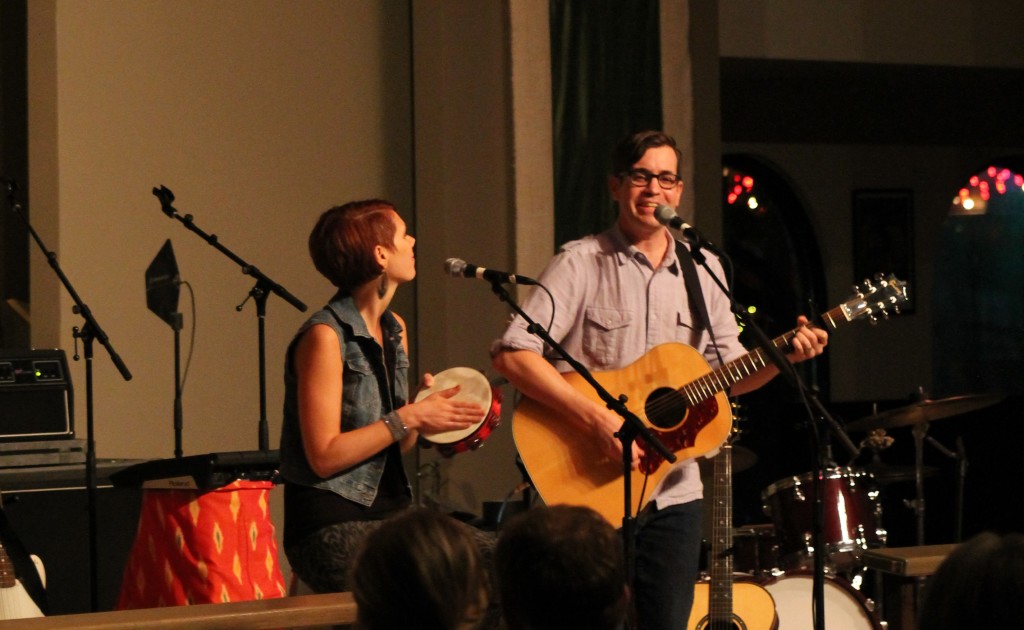 Ryan Flanigan and his wife Melissa.

I was born in 1979 into an Irish Catholic family in Chicagoland. When I was two years old, my parents had a powerful encounter with God in a Pentecostal church. I was raised in this church, heard all the Bible stories, memorized lots of verses, learned how to sing and had many, many charismatic experiences. It was also in this church that I began leading worship.

After high school I traveled the world with the Celebrant Singers, an ecumenical vocal ensemble and orchestra that ministered mainly to the Roman Catholic Church. It was during this time that I learned the ancient prayers and creeds and witnessed some of the rich history of Christianity. I had no idea how beautiful and rooted our faith was, the faith into which I was baptized as an infant. I fell in love with the liturgy.

In 2000, I moved to Dallas to attend Christ for the Nations Institute (CFNI), a charismatic Bible school. I loved my time at CFNI, especially the friendships I made and the musical chops I developed. Academically, I went off course, reading Luther and other Reformers on my own. This led me to pursue deeper biblical studies at Dallas Baptist University (DBU). During this time I was leading worship for a non-denominational church plant.

I married Melissa in the summer of 2003, finished up at DBU in 2004, and promptly moved back to Chicago to attend Trinity Evangelical Divinity School (TEDS). I became the worship leader of a Vineyard church while in seminary. They were too gracious and patient with me as I awkwardly put into practice what I was learning. The highlight of these years was studying with Dr. Robert Webber. In 2005 Bob planted the seed of Anglicanism in my heart and a Book of Common Prayer in my backpack.

Shortly after graduating from TEDS, we moved to Mishawaka, IN near South Bend to join River Valley Church, a non-denominational church, as their full-time worship leader. By this time I had a pretty clear vision of what I thought worship should be. It was an Ancient Future vision, inspired by Bob Webber.

My first three years at River Valley were wonderful. I was innovative, influential and quite effective in leading the church toward an Ancient Future vision of worship. The next three years, however, were very hard. The church’s practice of worship was where it needed to be, yet I kept pushing for more of what I wanted. I struggled in the wilderness of frustration and discontentment those three years. They were the most important years of spiritual formation in my life, preparing me for what was to come.

In my seventh year at River Valley, a very good friend of mine, an Anglican priest in Milwaukee, connected me to All Saints Dallas. He told me they may be looking for a worship leader and that I would fit the bill. So I hopped on the All Saints website to check it out. My eyes were immediately drawn to “three streams.” I clicked the button.

There I read that the three streams of a life-giving church are Scripture, Spirit and Sacrament. Was it possible for one church to be fully evangelical, fully charismatic and fully catholic? Could I take the best of all of my church experiences and meld them into one cohesive worship life?

One year later, by God’s grace I along with my wife and three kids were adopted into the All Saints family.

In my first staff meeting I reached into my backpack, pulled out my Book of Common Prayer and joined my new family in Morning Prayer. Other than taking it out occasionally for personal use it had not left my bag in the nine and a half years since Bob Webber gave it to me. I’ll never forget that glorious moment one year ago, when three streams converged.

Over the past year my children were baptized, Melissa and I were confirmed and we have thoroughly entered into the rhythms of Anglican worship and spirituality. I have greatly enjoyed learning about our tradition, warts and all. Most of all, I am thrilled to be part of a mission society that values all three streams to the full. As a group of charismatic, catholic evangelicals, the Anglican Mission is so unique among North American churches. How amazing is it for new believers to come into a church that is practicing the best of all traditions! And what a breath of fresh air to those with similar stories to my own! I look forward meeting and worshiping with many who have found their way into the Anglican Mission at the upcoming Winter Conference.

I was born Catholic, raised Pentecostal and educated Evangelical. As an Evangelical I frowned upon my Pentecostal upbringing. As a Pentecostal I frowned upon my Catholic birth. In my early thirties I began frowning upon all my frowning. I now see the goodness, truth and beauty in my past church experiences. I no longer focus on everything that made me frown. Three streams Anglicanism by way of the Anglican Mission is enabling me to continue affirming the good in my past experiences and to follow our Lord Jesus Christ into a life-giving future.

To listen to Flanigan’s music, check out his YouTube page.

This blog post first appeared on the All Saints Dallas blog and has been updated for the AMIA blog.

Transformed and Renewed by the Eucharist

The Pandemic Comes to the Classroom

From the Lead Bishop: Racial Reconciliation

The Value of Prophetic Ministry

Healthy Marriages: The Kingdom in the Ordinary