What’s the big deal about the days between the feast of Epiphany and Ash Wednesday? Isn’t Ordinary Time just…sort of boring? Hannah Coyne of Saint Peter’s Church investigates.

There is a new restaurant in downtown Charleston that is making big waves. Called The Ordinary, this seafood establishment has been hailed by Southern Living magazine as the South’s #1 new restaurant in 2013. According to the magazine, Chef Mike Lata has been known to make “veggies with pedigree chic.” Humble ingredients like oysters and okra are suddenly celebrated and elevated—with a price tag to match. This seems to be a food trend that is here to stay awhile, and I think the church has something to learn from it.

Chef Lata and Anglicans have something in common: We’re both hoping for something extraordinary in the ordinary. For the Church, we are square in the middle of Ordinary Time. Gone are the nativity scenes next to the altar. The candles lit during “Silent Night” are half-burnt and buried somewhere in the sacristy. Yet to appear are the bowls for foot-washing or the fresh-cut flowers that the children will bring forward for the cross on Easter morning. We are smack in the middle of… ordinariness. 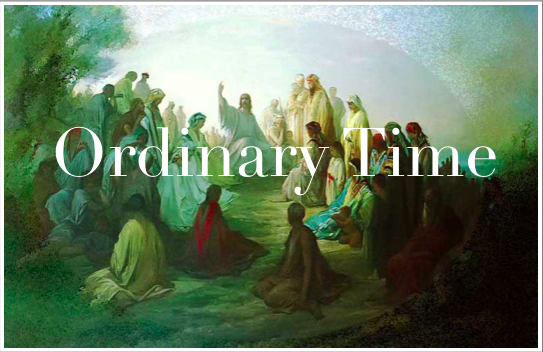 Yet as Lata’s wildly successful restaurant has shown, ordinary does not have to mean boring. Ordinary Time refers to the days between the Feast of the Epiphany and Ash Wednesday, as well as thee “ordinal” (numbered) weeks of Pentecost after Trinity Sunday. Ordinary Time encompasses all those Sundays where the clergy don’t don especially exciting robes, where the choir doesn’t sing especially difficult anthems, where extra ushers aren’t necessarily needed for overflowing worship services.

And yet, I believe that these very ordinary Sundays and weeks are crucial to our formation as Christ-followers. These are the days when habits are formed, when commitments are met, when laundry gets done. These are the Sundays when the word is preached “in and out of season” (2 Tim. 4:2), where our need to rely on the abiding presence of the Spirit is clear.

I think of the many times in the Biblical narrative where God makes himself present in the ordinary. God had promised Abram that he would make his offspring into a great nation. At the age of 75, Abram leaves his country and goes on a journey with God—an adventure in trust. Lots of ordinary days and years go by. In fact, Isaac is not born until Abram (now Abraham) is 100. Twenty-five years of ordinary time for Abraham.

I think of Daniel, known for his valor in the lions’ den and his extraordinary ability to interpret dreams. Yet Daniel lived a life of consistent devotion and commitment to the LORD as he spent many seemingly unremarkable days and hours in prayer. One of the most memorable scenes is this one: “While I was speaking and praying, confessing my sin and the sin of my people Israel and making my request to the LORD my God for his holy hill—while I was still in prayer, Gabriel, the man I had seen in the earlier vision, came to me in swift flight about the time of the evening sacrifice. He instructed me and said, ‘Daniel, I have now come to give you insight and understanding. As soon as you began to pray, an answer was given, which I have come to tell you, for you are highly esteemed’” (Dan. 9:20-23). An ordinary man, yet highly esteemed.

Because we believe in a God who is transcendent and yet closer than our very breath through the Holy Spirit, every day is graced and every Sunday is imbued with meaning. We do not need to rely on the adrenalin rush of a packed house on Easter Sunday, because ultimately we rely on the one who holds all things together (Col. 1:17). This is the God whom we proclaim to have created all things—even and especially ordinary days. The Spirit takes these ordinary days and makes them extraordinary by his presence, encouragement and sustenance, and we respond with our faithfulness. At The Ordinary restaurant, veggies become chic, and in Ordinary Time, days become graced.

Brother Lawrence’s Practice of the Presence of God is a good primer for those looking to experience the extraordinary in the ordinary. I’ll leave you with one of his thoughts: “It is, after all, our business to be as open as possible to God’s grace… But those who have the wind of the Holy Spirit in their souls glide ahead even while they sleep.”

Hannah Coyne is native of western Massachusetts and obtained her Master’s in Pastoral Theology from Regent College in Vancouver. She is the Pastoral Associate at Saint Peter’s Church in Mount Pleasant, South Carolina. Contact Hannah.